The Federal Reserve and the Extra 3%

That’s the cost so far, it seems. That's what spiking the economy with the pandemic stimulus — stimuli? — seems to mean for inflation we're seeing today.

I’m hesitant to even mention it. We’re still dealing with the fallout from the most unprecedented expansion of money in ALL of our lifetimes. This will echo for many years to come.

Yet we’re far enough away from the stimulus payments that we can see the fallout.

Don't take it from me, though. Let's go right to the source.

The Federal Reserve Bank of San Francisco (FRBSF from here on out) was tasked with something of a postmortem, early survey for what arbitrarily injecting over $2 trillion into the economy through direct, one-time payments would do.

It’s a mixed bag, to be clear, but it provides clarity that we couldn’t even imagine before, thanks to the real-world data it used.

Pictures are worth a thousand words. Let’s use both…

First up, here’s the FRBSF chart for the difference between inflation in the U.S. and other OECD nations — basically advanced economies that play along with global trade: 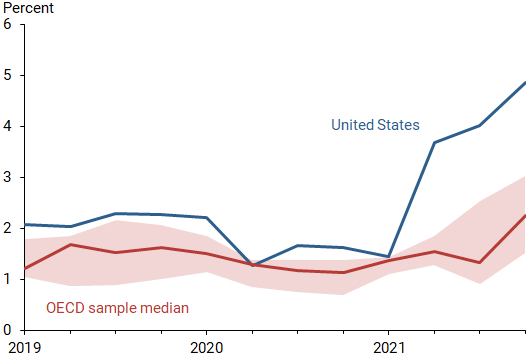 The OECD is stacked with countries that, especially through the end of 2021, are going to be playing by the same rules for commodities, goods, and shipping costs. It's really hard to tease out regional advantages, but for these countries, we can assume a pretty level playing field. The U.S. stands out.

We might as well look at the chart for “disposable income” too. Think of it as excess or abnormally high checking account balances. Functionally it is money that is doing nothing but existing on a ledger and tends to cycle back and forth, in and out of accounts: 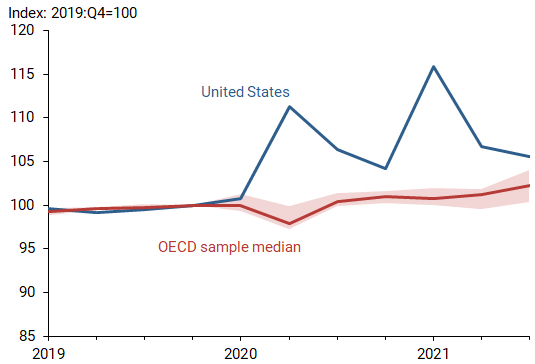 There are our previous stimulus direct payments going to taxpayers. In and out, there then spent, for better or worse we don't need to judge on this level.

We'll get to the interpretation shortly.

Finally, we get to how this matters in the real economy for prices.

This is the interesting one. This is the postmortem we want. This is wildly complicated as well.

Anyway, here's the chart, then we'll chat a bit about what it means. 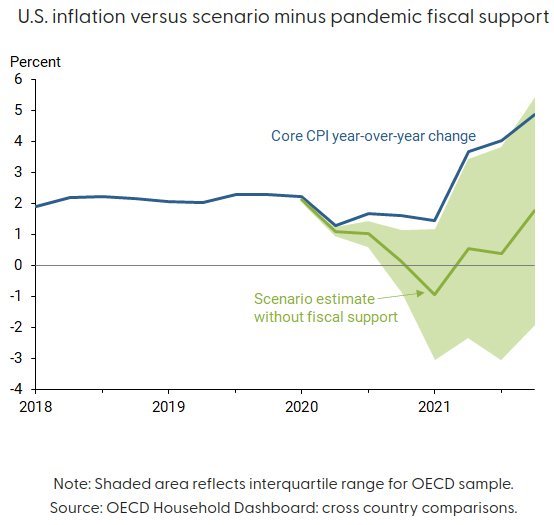 What no one wants to admit now, especially those that made the call, is that there was always a cost to pay.

The Federal Reserve itself is saying that inflation is running up to 3% more than it would have without dumping money into the real economy.

We've talked plenty about how "baking in" this monetary expansion would be problematic. That was long before the reality of market reaction actually panned out.

But make no mistake, this was a choice. It was one no one wanted to pay when it started. It is one we need to accept now.

As for what all of this means today? Well, we've enjoyed the Fed and government spiking results that were inevitably going to revert to the mean.

There was no version of this where we didn't borrow from the future to pay for the present. Now the present suffers for the past.

Investing and saving is complex. Now more than ever.

Give money to others to make more money later and you are essentially moving the effect of that money into the future. Unless you invest in debt. Create debt now and you're pulling future money into the present, and inevitably the past.

That's what we're dealing with. That's the cost we incurred. We took money from the future and we're paying a premium for it now. From debt being rolled into higher interest costs, from low interest rates over most of two decades, to mortgages in overheating housing markets.

We borrowed from the future. We gave ourselves preferential terms. Now we're in it and there is a cost to pay.

Around here at the Outsider Club we've been specifically talking about investments that will work going forward. From hard-to-gain knowledge about insider investment, to multi-year expansion of defense spending, to the most basic support for subsistence.

These are the trends that will expand even if the rest of the broader market contracts in response to what we've borrowed from ourselves, even as the bill comes due. Stay tuned, we'll have plenty more.