“The age of the Russian mail-order bride is over,” my friend told me when he returned from Moscow.

He had just visited Russia for the first time in over a decade, and he told me he barely recognized the place he grew up as a teenager... luxury cars clogged the city streets, beautiful women chatted on smartphones as they roamed clean sidewalks, and hungry babushkas snapped up bread in grocery stores lined with gourmet foods.

He was blown away at how much better the quality of life was.

And, unlike his last visit, my friend said the women he talked to had absolutely no interest in leaving the country.

“It's wonderful here!” they exclaimed. “We all have good jobs and would not even think about moving somewhere like America.”

And American investors may still be frightened by the rampant corruption that has plagued Russia for decades; the shadowy underworld of Russian economy that for so long was ruled by oligarchs who greased palms and bribed whomever they needed in order to keep a stranglehold on economic prosperity.

But things have changed. And as far as foreign investors are concerned, these changes are mostly for the better.

So join Outsider Club today for FREE. You'll learn how to take control of your finances, manage your own investments, and beat "the system" on your own terms. Become a member today, and get our latest free report: "Secret Dividends: How to Uncover One-Time Windfalls."

Say what you want about Vladimir Putin. He may be an egomaniacal, ex-KBG thug who rules with an iron fist, but he's also one of the wealthiest men in the world (and the single wealthiest man, if you go by his standards).

"I am the wealthiest man not just in Europe but in the whole world," he told a journalist this year. "I collect emotions, I am wealthy in that the people of Russia have twice entrusted me with the leadership of a great nation such as Russia — I believe that is my greatest wealth."

Putin's dramatic statement aside, he does seem to have shared his wealth generating capabilities, emotional or otherwise. The Russian economy has made serious strides since Putin took the reigns in 1999. From CCTV:

During Putin's tenure, the Russian economy grew for nine straight years. Its GDP increased by 72% in Purchasing Power Parity, poverty decreased by more than 50%, and average monthly salaries were lifted from $80 to $640.

Within 8 years, the country's industrial output grew by 75%, investments increased by 125%, and agricultural production was raised as well. During the same period, the middle class grew from 8 million to 55 million people, while the population living below the poverty line also decreased from 30% to 14%. GDP figures showed that by 2007 Russia had overcome the devastating consequences of the 90s recession.

These economic improvements and policy reforms are still bearing fruit:

As you can see, many things are heading in the right direction for Mother Russia. Prime Minister Dmitry Medvedev has even made it a primary goal to make Russia one of the top 20 countries in which to do business by 2018.

Since Russia's massive energy sector is completely beholden to world oil prices, its “oil risk image” has depressed prices for the consumer sector.

If this growth trend continues, Russia will top Germany as the single largest consumer market in Europe and take the No. 4 spot for the world by 2020. Add to that a puny $1,800 per capita debt burden (the U.S. sports a whopping $36,267) and historically low employment, and you have a recipe for ongoing prosperity and consumer spending.

Analysts are projecting a 10% to 20% gain in the next year alone from the sectors focusing on domestic consumption. And Merrill Lynch forecasts a tripling of the middle class in Russia by 2020.

If you compare it to the other BRIC countries, the consumer market looks even better...

Russia has the biggest proportion of middle class among the BRIC countries. Based on $15,000 annual median income, 55% of Russia’s households are in the middle class, versus 30% in Brazil, 21% in China and 11% in India.

On a forecast GDP per capita in Russia of just over $16,000 at end 2013, we estimate that it will take more than a decade for other emerging markets to reach this figure: 25 years for India, 20 years for China, 17 years for South Africa and 11 years for Brazil.

Wealthy households are also more prevalent in Russia with 15% of households having income above $50,000 versus 5% in Brazil, 2% in China and 1% in India.

Although the consumer sector seems to be driving most of Russia's growth — domestic consumption has delivered 80% of Russia’s economic growth since 2004 — you can't discuss investment in Russia without a discussion of the country's massive energy resources...

Russia has the largest natural gas reserves in the world, the second largest coal supply, and the ninth biggest crude oil reserves.

While the United States has actually surpassed Russia for the first time in oil production, Russian production has held steady.

That chart shows quite clearly why Russia’s share of world production has held steady: because all of America’s new “unconventional” oil has been barely enough to offset Europe’s production nosedive.

In 2012, the net oil imports of America’s close military and political allies in Western Europe were near an all-time high, while Russia’s net oil exports were actually at an all-time high. 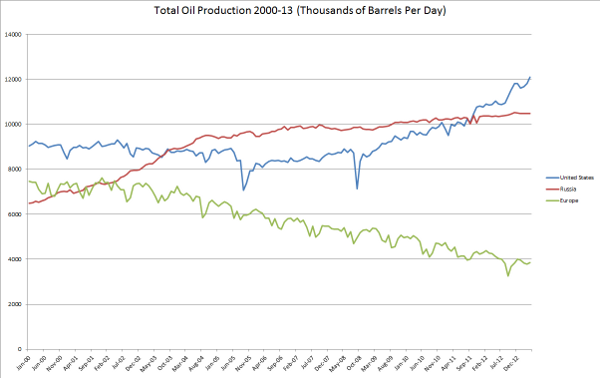 As Forbes stated, “The death of the Russian oil sector has been greatly exaggerated.”

Gazprom is the largest extractor of natural gas in the world, and they have had a legal monopoly on gas exports since 2006. They make up a whopping 10% of Russian GDP.

Their main market is Europe, where their exports are up almost 16% this year.

According to a report from J.P. Morgan: “No other large cap stock in Russia offers better potential to double over the next three years than Gazprom. We see the company’s valuation as still undemanding, and its ability to generate cash remains intact.”

In addition, Gazprom has assets in banking, construction and agriculture, among other sectors.

Lukoil is Russia's largest private oil company, second only to ExxonMobil in proven oil and gas reserves. Lukoil is currently developing Siberian shale oil fields that are estimated by some to have 2,300 billion barrels — that's five times more than the largest shale deposit in the United States.

How to Play It

The single easiest way for international investors to get a piece of Russia for their portfolios is an ETF.

The third largest holding is Sberbank (SBRCY), which provides corporate and retail banking. This stock has climbed 16% this year.

And in terms of consumer spending, the fund counts Mobile TeleSystems (MBT) and Russia's largest grocery chain, Magnit (MGNT), among its assets — both growth industries that should keep climbing as the Russian middle class expands.

And all signs are pointing that way...