How to Save a Fortune on Health Care

Medical Tourism on the Rise

Staying alive and healthy is expensive.

If you live in the United States, you can expect to spend somewhere in the neighborhood of $316,579 in health care costs over your lifetime. And with ObamaCare looming and insurance premiums set to skyrocket, things are setting up to get even more expensive.

For some, medical costs are the single largest expense they will ever have to shell out for.

However, there are ways to cut these expenses almost in half.

In pretty much every scenario, U.S. health care is overpriced at best and outright criminal at worst. And even with the soaring costs, the care itself is often of lower quality than you see in many other countries.

In fact, America is currently ranked 38th in the world for health care by the World Health Organization — worse than Cyprus, Argentina, and Morocco.

Why have a procedure here when you can do so more affordably and better elsewhere?

Hell, you may even squeeze a nice vacation out of it.

Just look at the fees for a routine visit in the United States, compared to several overseas destinations... 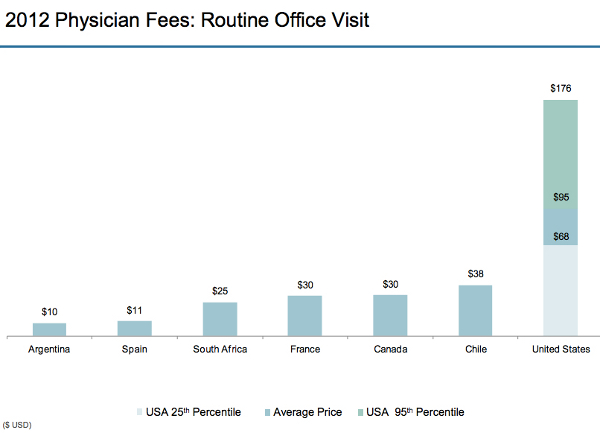 And for one day spent in a U.S. hospital: 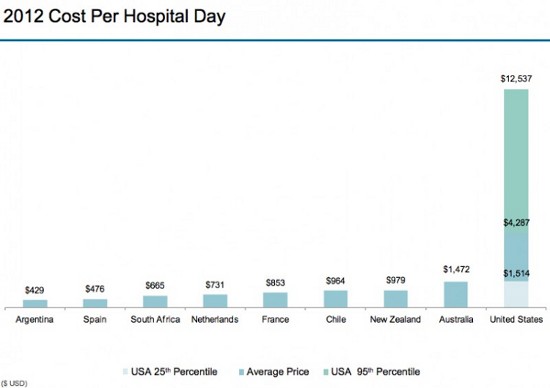 As you can see, we're not talking about chump change here. And it gets worse.

So join Outsider Club today for FREE. You'll learn how to take control of your finances, manage your own investments, and beat "the system" on your own terms. Become a member today, and get our latest free report: "World Economic Collapse: Grow Your Wealth in A Bear Market Epidemic"

Get the Hell Outta Dodge

A simple procedure like an MRI can cost up to $2,800 in the United States.

The savings would easily pay for a round-trip plane ticket and all of the red wine and paella you can handle... not to mention the priceless satisfaction of bypassing the broken, exploitative U.S. medical system.

The stakes get even higher when you start looking into big-ticket procedures like artificial hips, angioplasty, and bypass surgery.

For these procedures, at best you are paying twice as much — and at worst, a whopping 17 times more!

Just look at some of these disparities*:

*Stats courtesy of the International Federation of Health Plans

And you don't have to take my word for it...

Take the case of a man who saved $64,000 on a new hip. The New York Times profiled Michael Shopenn, who successfully took his medical needs out of the country.

Mr. Shopenn, 67, an architectural photographer and avid snowboarder, had been in such pain from arthritis that he could not stand long enough to make coffee, let alone work. He had health insurance, but it would not cover a joint replacement because his degenerative disease was related to an old sports injury, thus considered a pre-existing condition.

[...] Desperate to find an affordable solution, he reached out to a sailing buddy with friends at a medical device manufacturer, which arranged to provide his local hospital with an implant at what was described as the "list price" of $13,000, with no markup. But when the hospital's finance office estimated that the hospital charges would run another $65,000, not including the surgeon's fee, he knew he had to think outside the box, and outside the country.

"That was a third of my savings at the time," Mr. Shopenn said recently from the living room of his condo in Boulder, Colorado. "It wasn't happening."

"Very leery" of going to a developing country like India or Thailand, which both draw so-called medical tourists, he ultimately chose to have his hip replaced in 2007 at a private hospital outside Brussels for $13,660. That price included not only a hip joint, made by Warsaw-based Zimmer Holdings, but also all doctors' fees, operating room charges, crutches, medicine, a hospital room for five days, a week in rehab, and a round-trip ticket from America.

"We have the most expensive health care in the world, but it doesn't necessarily mean it's the best," Mr. Shopenn said. "I'm kind of the poster child for that."

You can say that again... I would happily hop on a plane tomorrow, if it meant savings in the form of thousands of dollars.

Where Should I Go?

Costa Rica is one of the most popular spots for U.S. medical tourism. International Living rated Costa Rica as the best place for health care abroad, rating it first for convenience, comfort, and care. It's also a pretty Westernized country, so most of the doctors you find will speak fluent English.

In San Jose, Costa Rica's capital, there are two hospitals that have a Joint Commission on Accreditation of Healthcare Organizations (JCI), the gold standard for international health care organizations: Hospital CIMA, which is affiliated with Texas' Baylor University Hospital, and Hospital Clinica Biblica, which has partnered with Miami's Jackson Memorial Hospital.

Plus Costa Rica is, simply put, one of the most beautiful places I've ever seen: lush rainforests, gorgeous beaches, and adventurous volcanoes...

What better way to recover from a hospital visit than with a stroll on the crystal clear beaches of Puerto Viejo, or a walk through the magical cloud forests of Monteverde?

One thing Mexico has going for it is the close proximity to the United States.

Now, don't let that trip to Tijuana during your college years fool you; Mexico has some first-rate hospitals and health centers. According to International Living: "Mexican hospital chains are modern, well-equipped, and much less expensive than their U.S. counterparts. A mammogram costs $60 out of pocket."

Dentistry is especially solid in some parts of Mexico. Slate author Molly McCloy tried it out firsthand:

I stuck with my plan to go to the office of Dr. Ivan Gonzalez, based on a referral from a friend's co-worker, who'd been going to him for four years. The waiting room had a clean linoleum floor and the chairs were filled with senior citizens from the United States. "Medicare doesn't cover dental," one of them said. Marvin Jorgenson, a 70-year-old in a hiking hat, told me with a grin that he was getting two teeth pulled.

Dr. Gonzalez, a beefy guy with a receding hairline, promised me that my $300 crowns would look beautiful and last 30 years. The price for the consultation? Gonzalez smiled. "Free, of course."

I challenge you to find a free consultation here in the U.S. And unless you have taken a grievous injury to your face or jaw, you may have found out the hard way that Medicare does not cover most dental procedures.

McCloy said when everything was finished, her teeth were the best looking they'd been in 23 years.

I just got a crown for one of my teeth, and even with decent insurance, it cost me $1,000 out of pocket. I'm going to Mexico for a wedding this year anyway, so I would have gladly waited a month if I knew I could save upwards of $700.

If you haven't been to the dentist in a while and have a few things to take care of, plan a trip to Mexico and kill two birds with one stone — and save thousands.

While Thailand may seem like too distant a place for most Americans seeking out of country health care, it has a lot going for it cost-wise.

500,000 people visited this Southeast Asian nation specifically for medical treatment in 2011, making it the most popular medical tourism country in the world. And it gets very high marks from medical travel agencies who regularly deal with patients...

Keep in mind that a flight to Thailand won't come cheap, so it is more a consideration for serious procedures. The doctors there specialize in counting coronary artery bypass grafts, hip replacements, and even spinal fusions — and they consider these serious procedures their areas of expertise.

A Word of Warning

While it may sound good to save a bundle of medical costs, there are obvious risks...

For one, you simply cannot show up in one of these countries and head to the nearest doctor or hospital. Before planning any trip, check out the aforementioned Joint Commission on Accreditation of Health Care Organizations. They evaluate and certify over 20,000 health care organizations around the world to ensure the safest, highest quality health care.

Make sure wherever you choose to go has their blessing.

You can also talk to your insurance company to see if they will cover any of your expenses. You may be surprised by how much you can save on top of the costs themselves. If you have a Health Savings Account (HSA), see if any part of your trip your trip qualifies under your spending regulations.

As ObamaCare comes online, there is no denying that demand for health care will jump, while the number of doctors will not even be close to keeping up. This looming supply squeeze should push more insurers into making overseas treatment an option.

If you do your homework, you could save an absolute fortune... and even enjoy an unforgettable getaway in the process.