Fed and the Elite vs. Americans and the World

Fed Clarification: We Only Serve the American Elite

Let's get something straight here, considering it came as a bit of a shock to the politicians and central bankers from 20 major economic powers...

The Federal Reserve doesn't care about you.

It doesn't care about the American people; it only serves the tiny number of Americans in the highest circles of the corporate and political elite.

While there's no question that the Fed has been devoted to propping up markets for the corporate and political elite, central bankers were under the assumption the Fed was committed to working with them to tackle a global issue.

You can imagine their surprise, then, as the Fed has clarified its position in recent weeks...

The divide became even more apparent as the G-20 meeting was wrapping up.

This drab communique was released after the two-day forum:

Our central banks have committed that future changes to monetary policy settings will continue to be carefully calibrated and clearly communicated. We reiterate that excess volatility of financial flows and disorderly movements in exchange rates can have adverse implications for economic and financial stability, as observed recently in some emerging markets.

In layman's terms, most of the group of 20 nations doesn't want any meaningful changes to worldwide central bank policies. They have no interest in rocking a boat that has risen on a tide of easy money faster than it could sink from its own unresolved problems.

But the Fed isn't going to play along with the global central bank rigging scheme — at least, not the way it has been and the way the rest of the world wants.

As Dennis Lockhart, president of the Atlanta Fed, put it after the late-August meeting of central bankers in Jackson Hole, Wyoming: "You have to remember that we are a legal creature of Congress and that we only have a mandate to concern ourselves with the interest of the United States."

That is absolutely true, though it has hardly been the case so far.

The Fed's balance sheet has expanded to a whopping $3.65 trillion by injecting easy money into the markets and banks. And a disturbing amount of the easy money the Fed created directly funded overseas institutions...

Shortly after the Lehman Brothers collapse, the Fed pumped billions into the U.S. branches of foreign banks.

As Eurozone banks were struggling to roll over $2 trillion of debts denominated in U.S. dollars back in 2011, the Fed came to the rescue yet again. While the cut-rate currency swaps from central banks included Britain, Japan, Canada, and Switzerland, a lion's share of the effort came from the Fed in the form of hundreds of billions poured from the U.S. central bank into European banks to prevent a foreign credit crunch.

In total, $7.7 trillion was loaned to mega-banks from 2007 to 2009, according to documents uncovered by Bloomberg News through a Freedom of Information Act request in 2011.

A vast majority was essentially off the books for a reason: The Fed didn't want to disclose the massive amount of support it was giving to mega-banks, and it didn't want anyone to know the scope of its intervention overseas.

In mid-December 2011, Sen. Lindsey Graham told reporters that Ben Bernanke himself said the Fed did not have "the intention or the authority" to bail out Europe. The very same week, Helicopter Ben flew to Europe and increased the size of these credit swap lines by about $52 billion.

The Fed didn't want to disclose that it was engaged in a secret campaign to prop up international banks and financial institutions and hand Americans the bill.

Estimates peg the total support given by the Fed to the ECB and foreign banks at $1.1 trillion.

Of course, none of this includes how the private market used money from the Fed.

As money from the Fed magically appears from nowhere and is pumped into global mega-banks and institutional investors, it starts freely flowing around the globe...

One of the problems with dumping a whole lot of cash into anemic markets is that they can only absorb so much before risk gets completely out of hand. So big investors and banks started spreading it around overseas, and a whole lot of private capital has been injected into foreign markets in recent years.

The Institute of International Finance, essentially a global banking club, has been keeping track of the trend.

With the Fed breaking ranks with other central banks and discussing an end to QE, net private capital flows to emerging markets in 2014 is going to drop to the lowest level since 2009.

Back in 2009, developed market to emerging market capital flow only totaled $649 billion. Since then, it has grown to $1.2 trillion.

As bank lending declined, a massive increase in portfolio investment — mostly through bonds — kicked in. 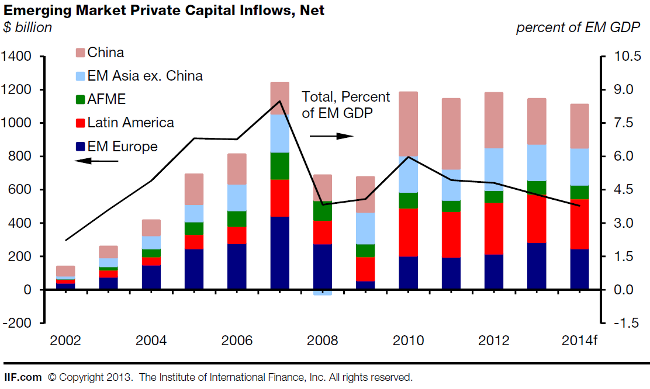 Brazil, India, and Indonesia were some of the largest beneficiaries as the trickle-down effect between markets turned into a deluge.

If the Fed tapers and interest rates rise, money will undoubtedly pull out of emerging markets.

The mere suggestion that the U.S. might taper QE was followed by a 20% collapse in the Indian rupee. The Brazilian real and Indonesian rupiah were hit very hard as well. The dropping currencies drove up local prices, resulting in slowing economies.

No wonder the G-20 is trying to keep the Fed pumping money. They are as hopelessly dependent on it to create the illusion of healthy economies, just as the mega-banks have been.

They are ultimately dependent on growth leveraged by you and me, the American taxpayer.

Lockhart also has some advice for the rest of the world: "Other countries simply have to take that as a reality and adjust to us, if that's something important for their economies."

Devoted to America, Not Americans

While the Fed has committed itself to a domestic focus, and plans on abandoning its unlawful international support, it will undoubtedly continue to ignore Americans. Just look at how the labor market has been shaped under the Fed's policies...

Since the recession officially began in December 2007, there are 5.8 million fewer full-time jobs and 2.8 million more part-time jobs. An all-time high of 8.2 million Americans are working part-time positions and want full-time jobs, but cannot find one.

The jobs report releases on Friday just adds fuel to this fire: 169,000 jobs were added, and the unemployment rate officially fell to 7.3%... yet nearly twice as many people — 312,000 Americans — dropped off of official figures.

The number of people with jobs actually fell 115,000 in August. The proportion of the U.S. population that had a job in August was 58.6%, the same as six months ago.

Virtually all of the gains in the stock markets have gone to institutional investors; retail investors never fully returned.

Instead of prompting the Fed to reevaluate how it is helping Americans, the gains in stock markets and recent job reports are just going to reinforce the status quo. It will also be used as false proof that the economy is slowly getting better for hard-hit Americans.

If the BLS and Fed referred to a far more accurate unemployment estimate that included all unemployed, marginally attached workers plus those who work part-time for economic reasons, more than 1 in 8 Americans are not being helped by the Fed's obscenely expensive programs.

Add in long-term discouraged workers for an even better estimate (as Shadowstats.com does) and nearly 1 of 4 Americans is unemployed: 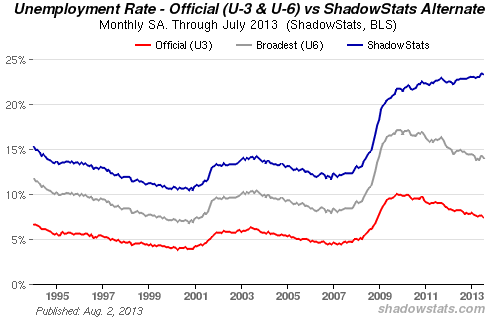 Lockhart was absolutely correct when he said that the Fed is a legal creature of Congress, and it is mandated to exclusively serve the interests of the United States.

The Fed has clarified its position, and the evidence supports it: The Fed is only in place to serve the elite Americans who run mega-banks and large corporations.

Only the people benefiting from cronyism and the revolving door have any sway.

For a couple years there, the interests of the Fed's masters aligned with the G-20, and so member nations enjoyed the perks of unprecedented intervention by the world's most influential financial institution...

Now they will have to fend on their own like the vast majority of Americans. The mercenary nature of the "powers that be" are apparent once again.

On behalf of the struggling masses the U.S. government technically represents, let me be the first to welcome the member nations of the G-20 to the Outside.