Everyone has had a run-in with "that guy" at a party...

He's on the fringe of an ongoing conversation, listens for a bit, and then chimes in with, "Well, actually..." and proceeds to deliver a contrarian monologue for the next 15 minutes, effectively killing the previously light-hearted conversation.

What can I say? I'm an opinionated individual with a drive to dig into the details for the facts. (If this quality wasn't practically encoded in my DNA, I'd never be writing for this column.)

This past weekend, over crabs and beer, I broke out a speech that left my brothers scrambling to grab fresh drinks.

Not only are they not on the same page as I am, but it was overkill for the lighter kind of conversation they prefer. And I realized on Monday morning it was out of place then and there because they were the wrong audience — but the topic is perfect for today's article...

What got me fired up was talk about a family friend who had lost her job a couple of years ago. She's finally found a full-time job.

The news prompted a comment from one of my brothers that it was "about time," that things were getting better all around.

Nearly five years have passed since the Great Recession started, and more than three years since the "recovery" began.

Plenty of back-patting ensues in Washington, D.C., whenever new economic numbers are rolled out. But it's a farce.

The market has been stubbornly testing new nominal highs for months and is up over 85% from the bottom. Corporate profits have been strong. This is what the government has convinced Americans — and especially the mainstream media — to focus on. 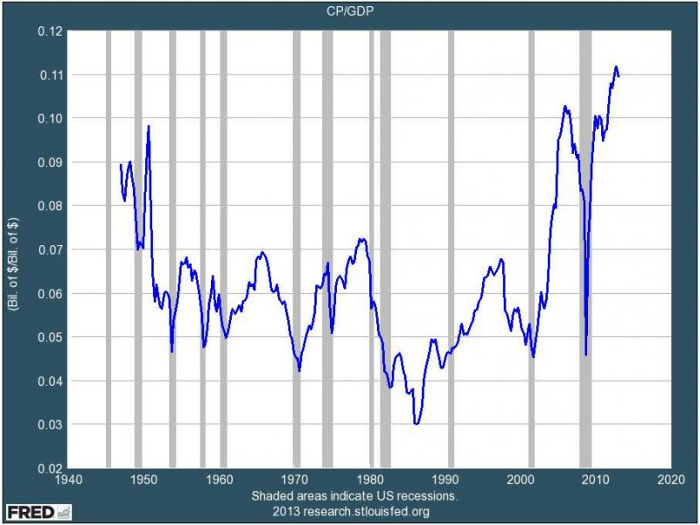 But take your eyes off the market and corporate profits for just a second, and you'll see at what cost...

Everything is falling apart.

Pensions are going to disappear from coast to coast as soon as the bills come due.

Roads are crumbling, bridges are collapsing, and we're living in a police state that has spent nearly $17 trillion of our future wages.

Americans are giving up on finding jobs and falling off the radar.

The official unemployment rate is dropping, while fewer Americans are employed than at any time in the last three decades.

Let's have a look at how things are "getting better" for those Americans job searching today: 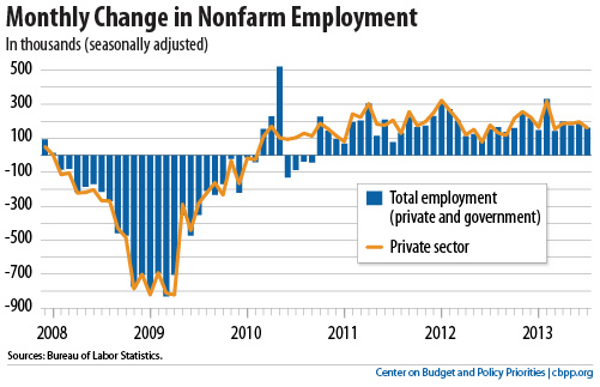 That big spike in employment is actually the result of the 2010 census.

All of those jobs were temporary.

If you average out the monthly gains since then, you get a figure right around 179,000 jobs added per month. Estimates put the number of jobs needed per month for a flat unemployment rate around 225,000.

We're about 25% below where should be just to tread water.

Since the recession officially began in December 2007, there are 5.8 million fewer full-time jobs and 2.8 million more part-time jobs.

In other words, anyone who finds full-time work is an exception to the norm.

While corporate earnings have tripled since 2000, the average weekly wage in America has only gone up 1%. 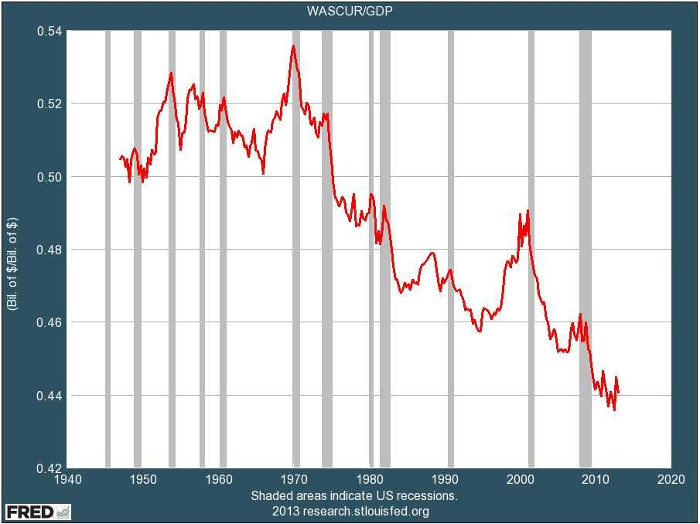 The reason for this massive disconnect is simple: Politicians and the Fed have abandoned their constituents to cater to lobbyists and donors representing massive corporations and mega banks.

Having listened only to the whispers of CEOs in closed-door policy meetings for decades, politicians have embraced efficiency, return on capital, and quarterly profit reports as the only indicators of a healthy national economy.

Meanwhile, the voters they are supposed to represent are left fending for themselves in the crumbling, trash-filled streets on the other side of barbwire fences and lines of SWAT teams in riot gear.

The exclusive focus on corporate well-being without any consideration for real Americans means that no one in a position of power can see that America is cannibalizing itself.

Corporations are gorging while Americans are slowly starving on an ever-dwindling share of the money made off of their sweat and blood.

Just look at the share of the economy being paid as wages... As it fell, more and more went to owners and boardroom salaries: 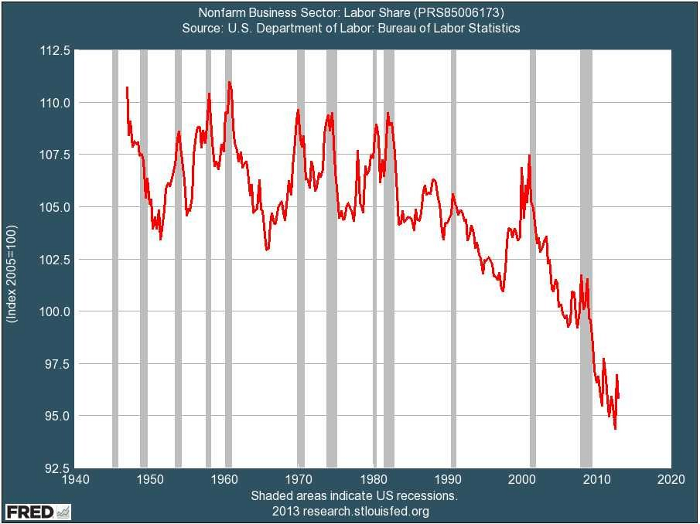 We're seeing the result of a nation's focus exclusively on corporate health at the expense of everything and everyone else.

The only people this helps are short-term traders and big investment banks — in particular, institutional traders that can move far faster in and out of stock positions while the rest of us are on a boom and bust roller coaster ride.

This is a far cry from what made America the greatest nation the world has ever seen...

And it will only serve to ruin us further.

America's economic policies, led by the Fed, are neglecting precedent, along with the workers that create profits for long-term owners and create meaningful long-term growth.

As long as this singular focus on quarterly financial metrics persists, we can expect the malaise and quiet despair of a vast majority of Americans to continue — and the chance of another crash to grow over time.

No wonder the recessions are happening more frequently and the recoveries are getting slower...

I have no doubt this will continue unabated. The Fed claims it focuses on the unemployment rate and monetary policy, but the simple fact is it was built for big banks by big banks — an organization chock-full of bankers working the revolving door for their own gain.

This touches on the core reason we started the Outsider Club, and is exactly why Nick founded Like Minded People...

You and I may be stranded on the losing side of a rigged game, but we don't have to rough it alone.

If you're on board, read more about Like Minded People here.