To get to the root of a problem, you have to backtrack to when it started.

For Alasdair MacLeod, that meant going back to the dawn of modern banking to uncover the systemic problems that threaten currencies worldwide today...

MacLeod, an economist and 40-year finance industry veteran, wanted to develop a way to compare sound money with fiat money. There simply was no truly accurate measurement of the quantity of currency sloshing around in the economy.

With the information MacLeod wanted, economists could use hard numbers and facts to measure the risk that confidence in fiat currencies might be significantly eroded, or even vanish altogether.

From our great-grandfathers back into antiquity, if and when a man could build up an excess of wealth, he held all of it as precious metals in the most literal sense. It didn't matter if you were a farmer on the frontier working a homestead farm, or a rich merchant in Boston exporting raw goods into Europe — everyone wanted real, sound money.

Imagine carrying your entire bank balance on you every day, or being isolated on a farm where a sheriff would have to ride hard for several days to get to you...

After selling your crop, you'd be holding the money you'd need for an entire year. Shipping goods was insanely expensive; a random storm or pack of highwaymen or pirates could rob you of your ship and capital. The threat of starvation because you couldn't plant next year — or that you'd go from a manor house to a debtor's prison as bills came due — was omnipresent.

Out of necessity, banks were born. It is a simple matter of efficiency. A lone man on a farm cannot do much with a rifle; however, if people band together and deposit their wealth in a guarded vault in one location, they can do business without gold and silver changing hands outside the bank.

Notes and deposit accounts from the banks were traded and ultimately redeemed in person, all under the scrutiny of the bankers. For guaranteeing and maintaining the system, the bank owners collected a cut of the action.

From humble beginnings, the bills that change hands to make trade and commerce safe and simple were twisted and corrupted.

Fiat currencies and central banks have appeared and failed in isolated cases going back over a thousand years before they took root in Europe.

For example, the Song and Yuan dynasties used paper notes backed by commodities starting in the 900s. In the end, the Ming dynasty squelched hyperinflation in the 1400s by banning the use of paper notes altogether.

Fast-forward to 1609, and the first bank to offer accounts not directly convertible to coin was established in Amsterdam. The central bank of Sweden followed its precedent 55 years later, followed by the Bank of England in 1694. The Bank of England became the model for virtually all other modern banks.

Unfortunately, the reason for creating the bank was virtually universal. Governments wanted to spend far more than they had or could reasonably borrow. Prudent lenders couldn't tolerate their abysmal credit, inflation, defaults and unmitigated risks.

In England in the 1690s, public funds were in short supply and were needed to finance the constant war with France. The credit of William III's government was so low in London that it was impossible for it to borrow the £1,200,000 the government wanted at the 8% interest lenders demanded. But to get these creditors on board, they had to sweeten the deal...

England ultimately gave them the name of the Governor and Company of the Bank of England. The bank was given exclusive possession of the government's balances and bullion, and it was the only limited-liability corporation allowed to issue banknotes.

The template of the modern central bank included a need to distort the banking system through the creation of a government monopoly on bank notes and cheaper debt than the free market would allow.

Jump forward to the 1960s: Central banking took another turn as the United States abandoned convertibility between bullion and cash altogether. All other central banks soon followed suit. The impetus for this was unsustainable spending to fuel the Vietnam War and Cold War deficits. Once again, a government manipulated the banking system for its own gain.

Currencies were now completely untethered to anything with intrinsic value.

What MacLeod set out to do was to quantify the effect this gradual process had on currencies and develop an accurate picture of monetary expansion.

When all factors are combined, you can get a really good idea of how much currency truly exists. 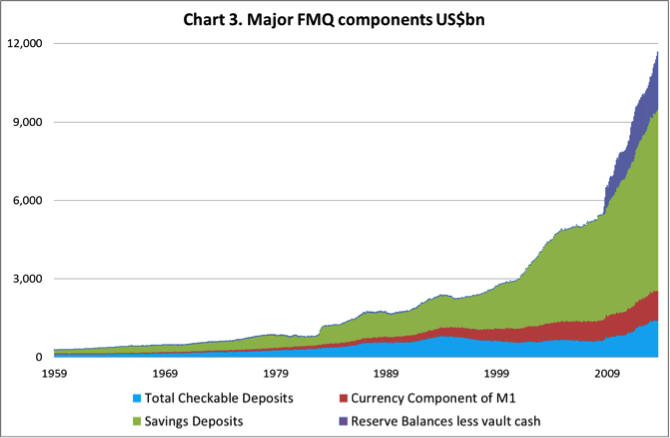 MacLeod's FMQ metric created an accurate picture of how much fiat money has been created, along with a historical baseline for monetary expansion.

The ultimate goal was to map out the theoretical reversal of replacing gold with bank notes, then gold-backed bank notes with unbacked, free-floating fiat currencies...

Going from 1960 to the month before the Lehman Brothers crisis in 2008, the average exponential growth rate was around 5.9% per year.

With quantitative easing, the stable year-to-year growth was shattered. The level of fiat money quantity is now over 60% above the long-term trend. 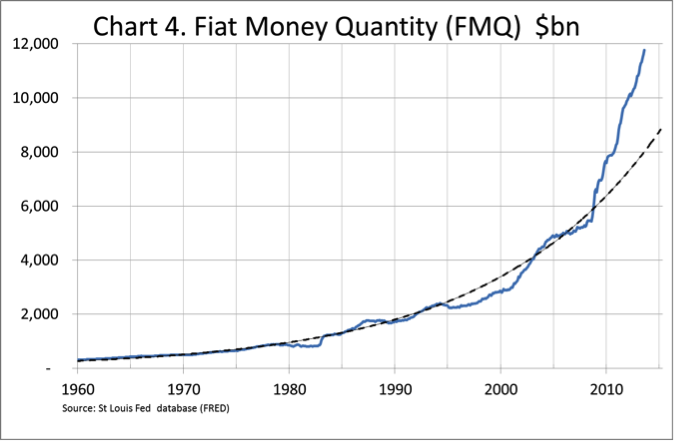 Deviation from the dashed baseline coincides with economic crises — from recession in the early 1980s and the savings and loan crisis later in the decade... to the dot-com bubble in the late 1990s and early 2000s... and the bubble from real estate asset securitization (aka the subprime mortgage crisis).

But all of these recession-causing events pale in comparison to the massive deviation from the baseline the Fed has created by expanding its balance sheet by $3 trillion — and by forcing the massive growth of required reserves.

The Fed now finds itself in a catch-22: The global economy is addicted to monetary expansion, and growth will come to a grinding halt if the Fed eases off the gas pedal.

At best, we're stuck in a debt trap. At worst, we're seeing the beginning of a hyperinflation trap in which money has to be created at an exponential rate, and the dollar's value drops to nothing.

The markets are clearly irrationally confident in the U.S. dollar and government debt.

Even if the Fed changed course now, a return to the baseline would involve years, or even decades, of global suffering...

We can also see the prices of commodities with real value are being repressed. There is always a time lag, and irrational conditions can be extended for a time.

But everything from food to oil to metals is historically undervalued, according to MacLeod's FMQ metric.

In July 2008, before the massive deviation in FMQ, gold traded around $918/oz. If you adjust that price using the extra fiat money quantity, gold prices have crashed. If the price of gold matched today, it would have to be around $1,860.

Just by taking a rational look the flood of extra dollars the Fed has created, we uncover an unprecedented risk of economic catastrophe, devaluation of the dollar, and a 40% upward correction for gold prices.

Using the hard numbers MacLeod provides, it is clear that the need for gold to maintain your wealth is greater than ever.