Biden's American Families Plan Is a Cheap Swing at the Rich

President Joe Biden is scheduled to present his American Families Plan today — in which he seeks $1.9 trillion to pay for programs designed to support families and children.

Among those programs include at least two years of free community college for adults, paid family leave, providing more affordable childcare, and implementing preschool as a standard in education.

To pay for all this, Biden's plan is explicit in ending Trump-era tax breaks and increasing taxes on the wealthy. In a statement released by the White House this morning, the administration remarked:

Alongside the American Families Plan, the President will be proposing a set of measures to make sure that the wealthiest Americans pay their share in taxes, while ensuring that no one making $400,000 per year or less will see their taxes go up.

Let's unpack this a little...

First, I think it's important to note the proposal clearly creates an obvious imposed moral dilemma. You can't argue against programs designed to help families and children without political or social backlash. Arguing against these types of programs is how you get "canceled."

So right off the bat, we must consider how Congress' decisions can be actively influenced using social pressure, resulting in at least a semi-forced choice, and whether that is a way of conducting politics that is wholly acceptable — especially in the American Families Plan.

Spoiler alert: It's not.

The combined price tag of COVID-19 stimulus bills approved by Congress was already over $4 trillion. None of those stimulus bills required taxes to be raised on anyone.

So why do taxes need to be raised now to pay for another one?

And boy did it create a lot of it. Over the past 12 months, the supply of U.S. dollars has increased by more than 25%. 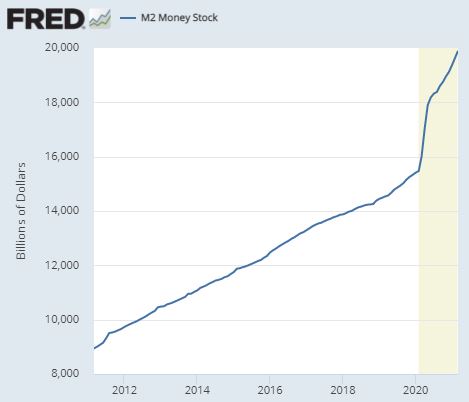 So why not just continue to print new money in order to pay for Biden's American Families Plan?

So join Outsider Club today for FREE. You'll learn how to take control of your finances, manage your own investments, and beat "the system" on your own terms. Become a member today, and get our latest free report: "2021 Gold Price Outlook: Why Gold Will Keep Heading Higher."

Every step of the way, the Federal Reserve has downplayed the inflationary effects of monetizing debt to pay for COVID-19 recovery. At its last meeting in March, the Fed upgraded its forecast that core inflation would rise to 2.4% this year, but then pull back to 2.1% by 2023.

The Fed's long-term target for inflation is only 2%.

Later today, Chairman Jerome Powell will announce the minutes from the FOMC meeting. And again, it's likely Powell will downplay future inflationary consequences from the fiscal and monetary response to the COVID-19 pandemic.

So the Federal Reserve is telling us that inflation won't be too much of a problem, even after adding 25% to the money supply. Can the Biden administration really say that printing up another $1.9 trillion in new money would be just enough to put inflationary pressures over the top? Definitely not.

Here's what I think is really going on...

Biden's motivation behind the American Families Plan is all (or mostly) political.

A significant part of the liberal spectrum that makes up Biden's base maintains an anti-rich sentiment. And taxing the wealthy delights those Biden supporters who are in that part of the spectrum. Playing Robin Hood is good PR for Biden.

At the end of the day, Biden's proposal for the American Families Plan really has little to nothing to do with programs designed to support families and children. Instead, it seems to be mostly a proposal to roll back a lot of tax breaks Trump made for the rich, end some tax loopholes, and hike taxes on the wealthiest Americans.

And, IMO, that would be a fine proposal.

I'd much prefer to see Biden take direct action in seeking tax increases on the rich. I'd be fine with a "Raise Taxes on the Rich" plan. I might not end up agreeing with the plan, but hiding behind the "families and children" banner to get the job done is cheap.

I had some glimmer of hope that Biden wasn't just going to continue to serve up a bunch of BS like the last administration. Yet, here we are.