An old industry is set to explode...

The axe landed with the power of God Himself upon the saloon’s mirror — sending shards of glass exploding in every direction as the drunken patrons froze in shock.

“Who is this insane lady!” they shouted, cowering behind their barstools.

Her name was Carry Nation, and she had announced her presence in a way that history would never forget. Wielding nothing but a small hatchet and the fury of a thousand scorned wives, she proceeded to destroy the entire Kiowa, Kansas bar, bottle by bottle. Nothing was spared from her wrath, and by the time her rampage was over she had torn the watering hole asunder, leaving no keg, faucet, or cash register intact. 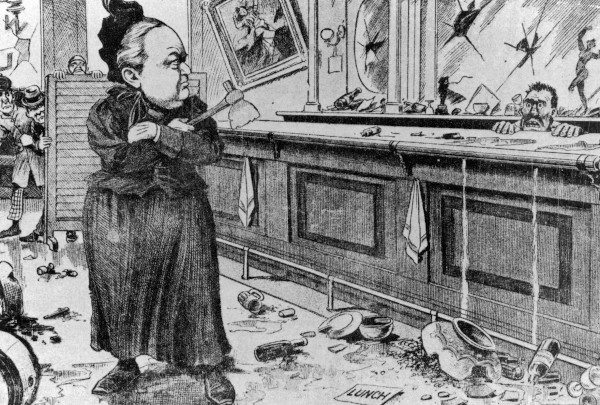 “I Cannot Tell a Lie...I Did it With My Little Hatchet.” 1895 Political Cartoon

Nation herself was soaked with the Devil’s Brew and the satisfaction that she was fulfilling her mission from God to rid the world of alcohol. She continued her destructive crusade in taverns across the country and made a name for herself as the most dedicated (and dramatic) prohibitionist in the U.S.

The above cartoon was one of the first items of discussion during our annual Angel Investment Summit last week. Our brain trust spent days dissecting the investment trends of the last century and how we could learn and profit from the past. Prohibition loomed large in these discussions.

That's because it mirrors an industry that will be minting millionaires today, just as the alcohol companies did after Prohibition way back then...

Last week I began my series on the investment trends we covered during the summit by going all the way back to the advent of the Ford Model T. I made the case that the trials and tribulations of Henry Ford mirrored the successes of the electric vehicle market of today. Around the same time as those Model Ts were driving off of the lots by the millions, a new golden age was brewing for the alcohol industry.

By the time Franklin Delano Roosevelt toasted a dirty martini in the Oval Office and repealed Prohibition in 1933, some of the most profitable companies in American history were birthed: Anheuser-Busch, Miller, Coors, and Brown-Forman and Company to name just a few.

As Mark Twain once said, “History doesn't repeat itself but it does rhyme.”

Of course, I'm talking about the cannabis industry. In fact, I've been making this comparison since 2014, when I was the first newsletter writer to visit Canopy Growth Corp. (NASDAQ: CGC). I toured the facility in Smith Falls, Ontario during the salad days when Canada was first flirting with the idea of repealing their own cannabis prohibition. Not only was I impressed with the professionalism and seriousness of the growing operation, but I was also taken aback at the conversations I had with the local Canadian law enforcement.

I spoke with several officers that told me some version of the same thing: This was just like alcohol prohibition. They were tired of making petty arrests and ruining the lives of otherwise-upstanding citizens. One officer was quite pragmatic about it and said that legalizing cannabis would not only keep more people out of jail, but the industry would provide thousands of good-paying Canadian jobs and pull in millions in much-needed tax dollars.

Join Outsider Club today for FREE. You'll learn how to take control of your finances, manage your own investments, and beat "the system" on your own terms. Become a member today, and get our latest free report: "Investing in Marijuana Stocks: Investing Without Getting Burned."

Canada did finally lift their federal prohibition and Canadian cannabis stocks blew up as a result.

As soon as I returned from my trip, I told my readers: “Marijuana stocks are gearing up to be huge in 2014 and beyond. As more and more states legalize both medical and recreational weed, those profits are going to keep on growing.”

My readers made up to 3,200% gains on that prediction. And we're about to do it again — the cannabis market is set to explode as prohibition finally ends here in the United States.

The writing is on the wall...

Public support for complete legalization has never been higher. The most recent Gallup poll reveals that a record 68% of Americans want to see prohibition lifted: 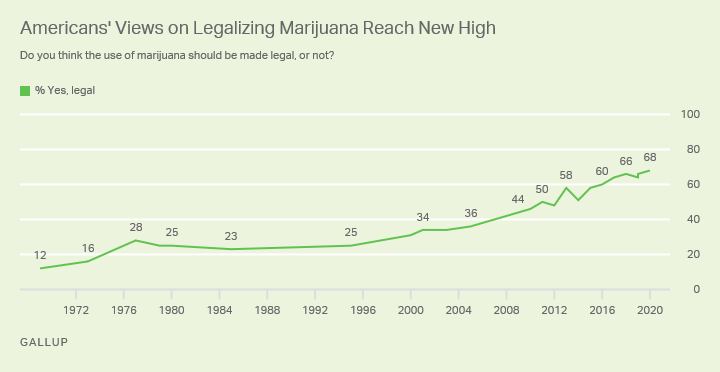 The Feds are also taking notice.

“We are going to move forward, period,” he said.

The U.S. House of Representatives has already passed the Secure and Fair Enforcement (SAFE) Banking Act in a 321–101 vote. The bill passed with bipartisan support and would allow financial institutions to provide services to cannabis clients without fear of federal penalties.

Like the repeal of alcohol prohibition, this is not a matter of “if” but “when.” Once it happens, it will allow for more U.S. cannabis companies to uplist to major exchanges. It will provide support from institutional investors and we’ll start seeing cannabis stocks in our 401(k) options. Marijuana companies will be pulled into large ETFs.

It will be just like the massive Canada boom, but on a scale much, much larger.

And smart investors that begin investing in U.S. cannabis companies right now will ride profits just like the alcohol stocks that skyrocketed for unbelievable 10-fold gains in the years after prohibition.