There is increasing evidence that a lot of people with a lot to lose are going to be burned, just like they did 13 years ago.

Every market collapse or correction is different, but they all boil down to the same underlying reason...

Some chase gains, while some become wildly bullish. Some become too greedy, while others simply try to catch up in the hopes that a rising tide will raise all ships.

Ultimately, they are all caused by a mismatch between investor sentiment and reality.

We've been over a number of signs that we're entering dangerously overextended territory with the post-Great Recession rally. And we've taken a look at several factors that illustrate the growing divide between market behavior and reality.

If you didn't catch those articles, here's a quick rundown of some of the key factors at play...

First up, we have the Fed essentially forcing investors into equities by dropping interest rates to zero.

At the same time, the Fed is continuously pumping cash into the market. This is fueling a credit bubble that's being exploited by corporations, which are creating value not through solid growth or capital creation, but through buybacks and virtually free credit.

Of course, this is quite intentional on the part of the Fed. Its ability to exploit the situation is calculated...

Now that the Fed has assumed the duty of instilling market confidence, its mandates to maximize employment, stabilize prices, and control interest rates have been thrown out the window.

Through mission creep, it has gone far beyond its authority by manipulating gains in stock prices.

The situation has gotten so bad that negative economic news actually encourages investors to pump more money into the markets.

Both situations are completely unsustainable — and they have formed a feedback loop wherein the Fed is encouraged to maintain a rally that is dependent on a lack of economic strength.

This asset bubble created by the credit bubble is a recipe for disaster.

Unfortunately, it looks like the people who will get burned are the same victims we've seen in the last two major market crashes...

That brings us back to how market crashes and corrections are universally caused by a mismatch between investor sentiment and reality.

As you can guess, mashing them all into one category is a terrible idea, because each type of investor has different outlooks and priorities.

Likewise, combining market sentiment only works for a general trend.

When you parse out the data a bit more, you can see how one group of investors can easily outweigh the others...

By examining the markets through an index, or thinking of investors as one homogeneous group, you will easily miss a divide that marks the easy stages of a reversal in broad market sentiment.

Here's a look at how this year's rally has panned out when you separate institutional investors, hedge funds, and private investors (from Bank of America Merrill Lynch data):

As you can clearly see, the major institutional investors are unloading shares in U.S. equities on to private investors.

We see a similar situation unfolding through data from Lipper. One of the best ways to track small mom-and-pop investors is through mutual fund inflows. This data captures a lot of the activity in retirement funds.

The Fed finally tricked investors to move into stocks this year, and now small investors are going all in. So far, investors have poured $277 billion into stock mutual funds in 2013. In the last five weeks alone, investors have invested $45.5 billion.

And small investors kept piling in, with $3 billion added to mutual funds.

At this pace, we'll see the largest allocation of investor money to stock-based mutual funds since 2000, when investors put $324 billion into stocks — right before the Tech Bubble burst as a result of wildly overvalued stocks.

In the three months leading up to the Nasdaq's peak in March 2000, investors put more than $138 billion into equity mutual funds and ETFs — nearly half of what was invested in stocks for that entire year.

Market sentiment, when divided between institutional investors and small retail investors, shows a disturbing trend: Right as the market tops, small investors buy in, as the big players capture gains... and leave the little guys holding shares as they plummet.

A Way Out While Staying In

A growing body of evidence is building for a way you can stay in the market without overexposure to downside risks in the broader market. You simply have to find companies that are under-appreciated now to weather through the impending correction.

First, implied correlations — a measure of how closely the performance of individual stocks mirrors that of the index itself — have fallen to their lowest since October 2007 after peaking in 2011: 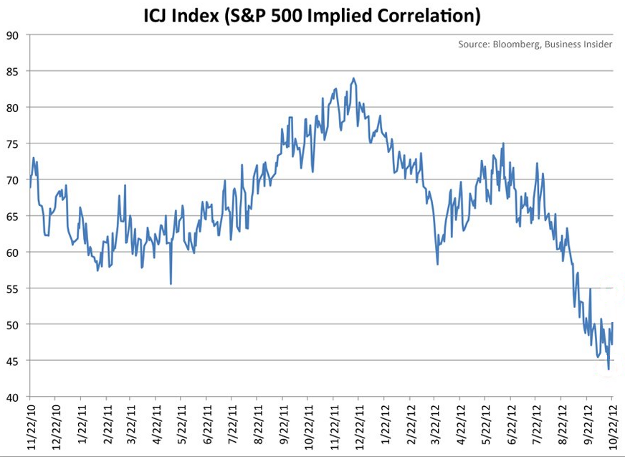 Instead of the returns of most stocks clumping close to the index returns, we now have a much broader spread on how individual stocks perform. There is no longer a single prevailing tide in the markets that forces all stocks to gain or lose value in tandem.

Second, stock picking is showing outsized results. Of the U.S. funds run by active managers, 57% are beating their benchmark indices this year, according to fund-tracker Morningstar.

That is the best overall performance for the industry since 2009 — and well above the 37% of all funds beating the market.

Getting out of the market entirely is irrational, but so is blindly chasing gains when the pros are capturing the very profits you're chasing.

Stay disciplined, stay objective, and wait for single companies to prove their worth.

Avoid the inflated shares out there that have been buoyed by easy credit, buybacks, and the irrational exuberance of the herd.

If you want some help, both Nick and Jimmy can help...

Nick Hodge's Early Advantage has posted a 54% gain amongst closed positions in 2013.

And Jimmy's Crow's Nest advisory is up nearly 12% in just four and a half months (30% annualized), beating the S&P 500 over the same period of time.