Americans Have Lost Faith in the Fed

High in an ivory tower far from the masses, the architects of the modern stimulus-based global economy have enjoyed a deference to their expertise and authority for years.

In spite of the power they wield and the years of experience they have accrued at the helm of one of the most powerful economic institutions in history, the Fed has allowed itself to drift too far from reality.

They are prone to the same mistakes we all make. They trust themselves more than they should. They dismiss valid criticism when it doesn't mesh with their priorities. And they have become complacent and failed to adapt after years of hegemony.

Regretfully, many people — including influential economists — clung to faith that these tinkering academics knew best. They ignored obvious proof of unprecedented risk and misguided policies and fell in line behind those of the federal government.

However, the number of people calling on them to look out the window at what is happening in the real world is growing, as economists and even Fed officials are taking off their blinders to have a stark look at where they've gone wrong...

All arguments against the nature and risks of quantitative easing aside (and if you've read my articles in the past, you know I have plenty), it is abundantly clear that the Fed is using antiquated concepts and bad information as guidance.

About 11 months ago, the Fed gave a much anticipated target for the end to the quantitative easing programs, even as it expanded its $40 billion per month mortgage-backed securities purchases by adding $45 billion of Treasuries per month.

As long as official inflation rates didn't exceed 2.5% — and so long as official unemployment rates fell to 6.5% — the end of four years of tacking trillions on to its balance sheet and keeping interest rates just above 0% would be in sight.

So join Outsider Club today for FREE. You'll learn how to take control of your finances, manage your own investments, and beat "the system" on your own terms. Become a member today, and get our latest free report: "10 Ways to Avoid Gold Coin Scams."

Unemployment at the time was around 7.9%. Today it is around 7.3%, thanks to people abandoning their search for jobs, disappearing from official stats, and increases in below subsistence level part-time job creation.

Meanwhile, the real ranks of unemployed and underemployed workers have risen to well above 20%. The percentage of working-age Americans who either have a job or are looking for one reached a 35-year low last month. Even the government acknowledges the figure is at 13.8% through its broadest measure.

Perhaps if the Fed stopped using bad information, it would realize there is potentially no real end in sight.

Take a good look at this chart: 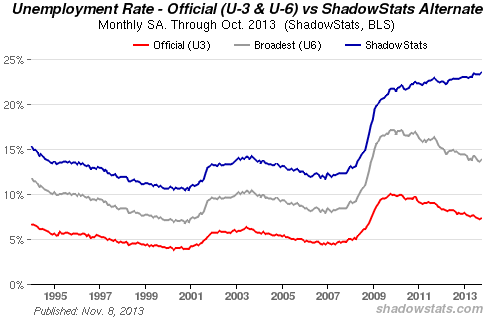 Now consider the following: Since the 10% peak in official unemployment figures in October 2009, the rate dropped an average of .875% per year. The broadest measure from the government has kept pace.

But let's assume this year isn't forming a new trend and use the average for our purposes...

At that pace of improvement in the official unemployment rate, it'll take at least until the very end of 2014 to hit the Fed's target.

If the real SGS alternate unemployment that actually includes everyone out of work returned to its pre-recession spread, we'd have to make up another 4%. So that puts us at early 2021.

If the Fed continues to use bad information as it tries to push the nation back to the old standard for what it considers to be a healthy economy, we could be looking at 12 years of continuous quantitative easing.

Another blatant sign that the Fed has consistently been using bad information and antiquated concepts is through its GDP projections. Year after year, the Fed has repeatedly clung to the belief that the economy will turn a corner in the near future — and growth will return to a pre-recession pace.

Year after year, it has been wrong.

The following chart tracks the evolution of the Fed's real GDP forecasts over time. It is consistently overestimating growth and being forced to revise its forecasts downward. 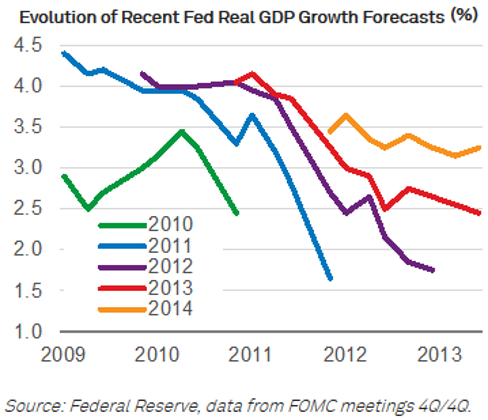 Instead of adapting to the new norm, the Fed's policy-setting Federal Open Market Committee expects about 3% GDP growth next year — and up to 3.5% in 2015.

Productivity and the growth of the workforce set our economy's potential, because it depends so heavily on domestic consumption. We need people working and making more every day to avoid recession.

Growth in the U.S. labor force averaged 1.6% from 1970 to 2010, but dropped to just 0.9% last year. Going forward, the Congressional Budget Office expects the rate to decline to 0.4% in less than a decade as baby boomers retire.

Productivity is slowing, wages are effectively dropping, and unemployment reductions are too slow to sustain the economy.

Americans will consume less and less, and productivity will slow (or stay sluggish at best).

The economy cannot come close to the Fed's forecasts.

And still, the Fed continues on with its belief that Uncle Sam is about to see a surge of growth, and this growth is right around the corner, all because bad information and faulty methodology are driving misguided policies.

With the Fed's consistent errors and shortcomings, more and more economists and even Fed officials are rejecting the Fed's official stances.

Influential economists and policymakers are increasingly becoming wary of the Fed.

Jeffrey Lacker, president of the Richmond Federal Reserve Bank and a long-time critic of Fed policies, said earlier this month: "This sense that real GDP growth is going to pick up soon — I'm very skeptical about that. I know it's a popular forecast, but I'm skeptical, I see 2% growth ahead."

Even Larry Summers and Paul Krugman have acknowledged that our future growth will be far slower than the Fed thinks...

In a speech to the International Monetary Fund, Summers stated that we have an economy whose normal condition is one of inadequate demand; it only gets anywhere close to full employment when it is being buoyed by bubbles.

And in a New York Times editorial on November 18, Krugman cited an aging population, slow population growth, and how the massive rise in household debt relative to income didn't push demand ahead of supply as further evidence.

Krugman is acknowledging that demand will stay weak, consumer consumption will be stagnant, and the fact that there is no foreseeable way to drive economic growth beyond a sluggish pace.

He still wants increased spending (is anyone surprised?), but concluded by saying: "But as Mr. Summers said, the crisis "is not over until it is over" — and economic reality is what it is. And what that reality appears to be right now is one in which depression rules will apply for a very long time."

Fed officials are finally facing the music: Their policies are built on bad information and antiquated views that threaten to create dangerous asset bubbles.

The Fed needs to take a good look at the reality of the "new normal." Using policies designed for greater economic growth aren't just misguided; they can (and will) profoundly harm our economy by creating inflation and asset bubbles.

The sooner this changes, the better.