A (Short) Investor’s Guide to the Shortage of Everything

It started with toilet paper, hand sanitizer, and cleaning products. It went to lumber, yeast and flour, and gardening supplies. It went further to housing, basic commodities, and onwards to... ketchup?

The cascade of things that we suddenly don’t have enough of goes on and on. Contrary to gut reactions, it does make sense, and it will keep making sense for years to come in some cases.

The profit potential isn’t uniform though, and we should talk about that, especially as consumer demand rises.

Let’s do a "quick and dirty" on this and focus on what matters for investors.

I shouldn’t have to say this, but some trends are not profitable. To be specific, they will not be profitable to us.

Ketchup stands out as something that won’t really matter. Ketchup? Heinz isn’t going to see a windfall. At least not one you can capitalize on.

Toss most of the consumer goods in that category. You’ll see an outsized effect from broad market gains rather than any profits from a single division of extremely large conglomerates that sell the same old stuff on the world market.

Don’t get me wrong, a lot of these stocks have done really well, but the action is done, or it will at least be muted compared to other market forces.

There are only a handful of shortages that matter. Even within them, the nature of the shortages matter.

If you’re taking tomatoes, sugar, and vinegar and making something, you’re not coming out of this shortage in much better shape than before. If you can leverage the shortage to make something far better though...

Look no further than the “chip shortage.” Not the one you're mostly hearing about though.

You would do yourself a profound injustice if you lump all computer chips in the same category.

At the same time, it’d be an injustice if I bored you to death with parsing the differences.

The short version is that chips are wildly diverse, and there are two types that stand out. They mostly exist at the two extremes — not for processing power, but for design.

The implications of the chip shortage depend heavily on the individual situation of the chipmaker, and the same goes for what its customers need. Goldman Sachs dropped a list of 169 industries that will be affected. I certainly didn’t look at them all, but surely there is a profound range of severity and disruption.

The chips you’re mostly hearing about, for cars and such, are not going to change much. Carmakers lock in set requirements for what they want and they use the same modular chips for most of what they do.

Even if that wasn’t tied to the whole “brand new [insert make and model every five to 10 years here]” paradigm, they really don’t need much else.

They’ll charge you a hefty premium for the bells and whistles, for sure, but they locked those contracts and designs in years ago.

Chipmakers have done well with these designs. They simply need to charge a premium while maximizing productivity. It's a flash in the pan. A one-time injection of a little extra money.

What is far more interesting is the high-end chip designs.

Computer chip manufacturing, as a business, is normally low-margin, weighted by volume, and cyclical due to the high time and capital investment to bring new manufacturing capacity onboard.

Chipmakers are all too aware. They’ve watched suppliers for major companies come and go simply through cash crunches as a result of getting the timing a bit off.

The high-end chip market is a different beast though. The business-to-business market (read that as everything but niche markets like high-end gaming computers — looking at you NVIDIA) is dramatically ramping up while this shortage is happening.

I like to think of the chip shortage we see today as a “rogue wave” of demand. There is the normal ebb and flow and, occasionally, another wave of demand, moving at a different speed, catching up, and amplifying the situation.

For a simple visual of how different trends, or waves, that move at different speeds combine, here is a simple video. It's about a minute long: 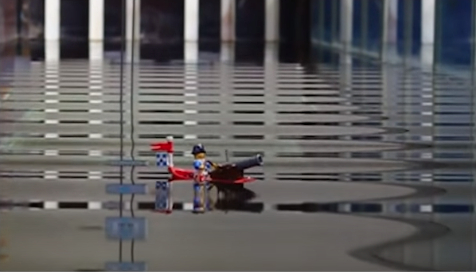 The real advantage here, for us, is that we have the option of playing the short-term or long-term trend. The current chip shortage will boost immediate demand, the longer trend will boost growth.

Plus, the increase in sales creates what the chipmaker industry needs to revamp what they can offer — free cash flow to invest in new designs and new fabrication lines. A small windfall can be leveraged to create a whole lot of profit down the road.

Out of this current chip shortage, we will see a wave of adoption of manufacturing capacity for the latest generation of hardware that will drive the future of all tech, from the cutting edge now to the painfully mundane over time.

Increased revenue will almost exclusively go to manufacturing capacity for the best of the new generation of design.

It is a virtuous circle, so to speak. A positive feedback loop that will build upon itself — at least for the companies that own the best chip designs and fabrication lines.

It doesn’t work out so well for people that want cheap chips to stuff in consumer goods (and yes, cars are consumer goods) today, but for investors that realize that increased cash flow exclusive is reinvested in new design manufacturing, it is a welcome and necessary windfall.

You’ll be hearing a lot more about shortages as the economy ramps up. It isn’t going to be lumber, or consumer goods, or weird outliers like ketchup that matter in a couple of months (at least to us). They cannot be improved.

It is all about what money today can be used to make better chips tomorrow. There is nothing like the chip shortage to spur that along. This is how this industry works.

This is also how Jimmy Mengel has positioned readers of The Crow’s Nest to see a legitimate windfall with multiple catalysts for the potential to pay off — short-, mid-, and long-term.

You really should hear it from him, but there have been few real shots at playing pandemic shortages that offer so many routes to profits and over so many timeframes.

You can check out what he has here. Computer manufacturers certainly are, and you won’t have an easy time leveraging current shortages into real gains elsewhere.