If not for the pandemic oil might have been the biggest financial story of 2020.

As you might remember, just before everything went to hell in a hand basket, Saudi Arabia and Russia got into a huge pissing match.

Instead of cooperating to stabilize oil prices as they had for so long, they flooded the market and slashed their oil prices in an effort to drive higher-cost producers from the market. 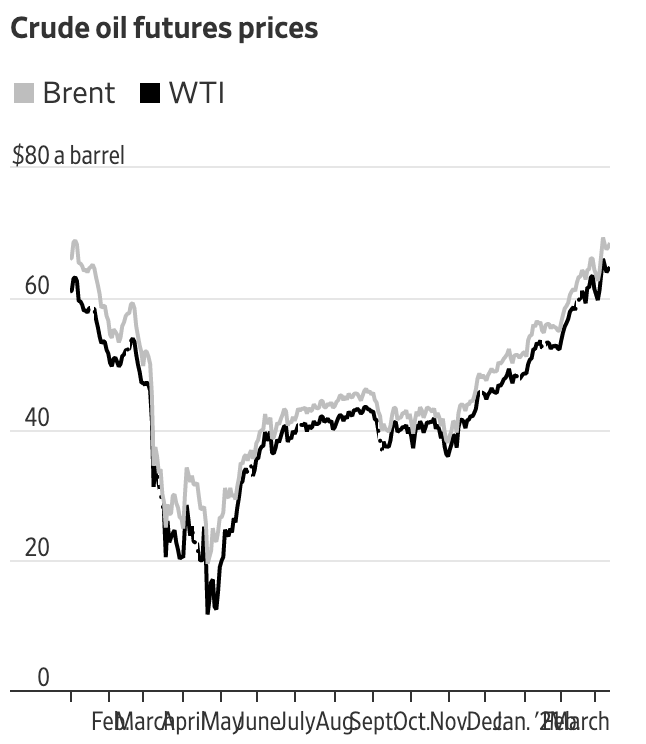 But that's nothing compared with what would happen a month later when the full force of the coronavirus slammed the global economy. That's when oil prices fell by more than $50 a barrel in a single day, to less than zero at one point.

Carnage ensued. The oil industry was forced to idle hundreds of rigs and throttle many wells shut (some permanently), and hundreds of thousands of oil and gas workers were laid off.

Obviously, things are looking a lot better today. The economy has been resurrected by trillions of dollars in fiscal and monetary stimulus. And commodities are enjoying a cozy renaissance.

Oil prices have staged a comeback and are now trading above $65 per barrel — an 80% surge from their October lows.

Better still, for the industry at least, they're poised to shoot even higher.

So, too, are gas prices.

And with vaccinations on the rise, infection rates on the decline, and a massive $1.9 trillion stimulus package sailing through Congress, that's likely just the beginning.

Already buoyed by higher oil prices, we're about to see a massive resurgence in car travel as people get back to their offices as well as movie theaters, restaurants, and vacations.

Indeed, summer traditionally brings higher gas prices as demand rises, but travel figures to be especially robust this year as people get reacquainted with their cars.

Which begs the question: Will that be the tipping point at which inflation finally takes center stage — not as a potential threat but a real one?

Don't get me wrong, while a weaker dollar drives oil and gas prices higher, this surge has far more to do with supply and demand.

But the public rarely sees it that way.

To most Americans, rising numbers on gas station signs are inexorably linked to inflation. It takes people back to the 1970s when President Nixon broke the last link between the dollar and gold and (like another former president I know) leaned on the Fed to print money to bolster his election chances.

Of course, the subsequent inflation was then further compounded by the 1979 oil crisis, which resulted in tapped stations, rationing, and unbearable lines.

We're not likely to see anything that dramatic this time around, but the sight of soaring gas prices triggers a very visceral reaction for many.

It also makes a lot of political hay.

You might remember the last time this happened, during the Obama presidency when oil prices surged over $120 per barrel, delivering record-high gas prices.

A parade of Republican politicians were quick to pounce.

Mike Lee, the tea-partying senator from Utah, cautioned that if Obama got reelected, gas prices would reach $5.45 a gallon by the start of 2015. (Regular retail gasoline prices averaged $2.43 per gallon that year.)

Mitch McConnell commented that the soaring prices were “the painful effects of President Obama’s energy policy.”

And according to Mitt Romney, “the doubling of gasoline prices obviously follows a presidential policy” and Obama should take the blame “for what’s happened to gasoline prices under his watch.”

You can bet Republicans will make sure Americans know who to blame for their $40 fill-ups this summer, too. And it won't be gun-shy oil producers who are limiting their production despite crude's recent gains.

And it won't be hard to tie the surge back to this week's massive stimulus, either. Indeed, that package, viewed by many as sensible today, could come to be viewed as costly inflation-sparking boondoggle in a few months.

At that point the rising costs of food, shelter, and medicine that I've been bemoaning for the past year will suddenly find new purchase.

And the establishment and the public will suddenly, and somewhat ironically, have a new infatuation with inflation.