We're Goin' Up Around The Bend

We’ve talked a lot about what I like to call the "Great Extraction." I started talking about it nearly 10 years ago when it became clear that the Fed might never slow the printing presses even if it could.

Quick note — I'm pretty sure I stole the term from someone, but I did a cursory Google search to see if I could find an attribution and “great extraction” results seem to focus on pulling teeth and removing blackheads. Needless to say, I had no appetite for scrolling through pages of search results with descriptions of either.

I’ve revisited it many times, in sometimes roundabout ways, over the last year. Now it is more important than ever to bring a lot of that info together.

After all, we’re supposedly coming up on an end to one of the most extraordinary times in our society and economy with the steady rollout of vaccinations and the predicted decline in COVID cases.

With it, we’re also approaching the end of what may, in time, be recognized as the biggest double-down bet in economic history.

To go back a bit, when I talk about the Great Extraction, we can trace it back to the Chicago school of economics and Milton Friedman, who opined that companies have no social responsibility to the public or society. They exist to generate profits for stakeholders.

This is seen as a nearly Machiavellian view in some circles, but it is functionally benign. Friedman never argued against a need for social responsibility, just that businesses weren’t the right vehicle for it.

Yet the proof is there that this is fundamentally flawed in the real world as we follow the evolution of the intersection of business, government, and society since the middle of the 20th century.

It took decades to pan out, but in time CEO and board-of-director compensation packages were restructured to reward short-term share price improvement. Of note here, a matrix of fundamental metrics for long-term growth was devalued in the process.

As such, we’ve seen a massive expansion of corporate free cash flow going to dividends and share buyback programs. Wealth has been increasingly extracted from companies and disproportionately skewed to incredibly short time frames.

First salaries, then compensation in the form of pension and stock programs for the rank-and-file workers in corporations, were slowly starved to serve this function.

Compensation through more direct and immediate methods, namely wages, looked fine at times in some regards, but there is a reality to percentage gains. Pulling from an article I wrote back in June 2020: 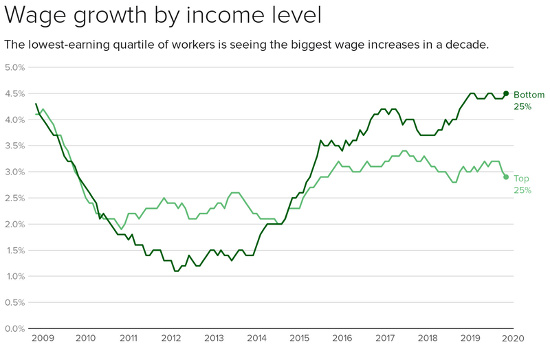 Without a second thought, this chart looks great. Finally. the pendulum swings back after decades of disparity.

Even when the times are good they are still really getting worse for a majority of Americans. They — we — are perpetually getting left behind.

With the Great Recession, a unprecedented new phase started. There was widespread demand for some form of relief from the excesses of profit-seeking without regard to the long-term health and profits of companies.

Wage disparity rapidly accelerated, and that doesn't even include investment gains. Since 2009, over 90% of profits generated by S&P 500 companies have gone to dividends and share buybacks.

The government, using the questionable practice of selling its debt to what is essentially itself with bond transfers from the Treasury to the Federal Reserve, provided a government guarantee, more or less, for cheap corporate debt.

The explosion of this debt was inevitable, and a disturbing amount was extracted through the ever-increasing use of free cash flow to create payouts to shareholders, who were increasingly insiders and institutional investors with control over board-of-director seats.

You can see the rise from far lower levels in this PDF from Yardeni Research. Here is a look at some of the charts within: 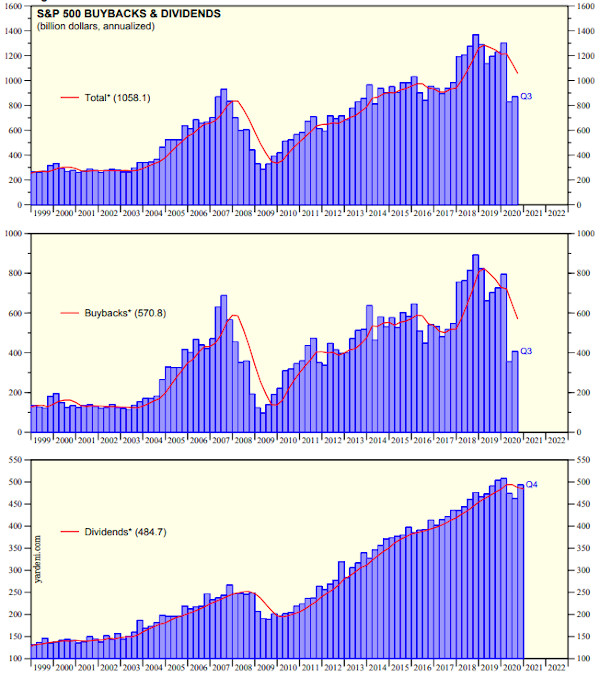 A Duke survey of CFOs found that 78% — three out of four — of them were willing to “give up economic value” and 55% of them would cancel a project with a positive net present value in order to fulfill Wall Street’s desire for “smooth” earnings."

Elsewhere, Quantitative Easing exploded and never truly ended. The Federal Reserve has all you need to recognize that in another chart:

And at the same time, in a broader form of economic indicator contagion, the results started showing up in more exaggerated ways across a slew of metrics. M2 monetary velocity stands out, in particular.

The simplest of ways to explain this is that M2 monetary velocity is how often dollars change hands. That is a strong indicator of inflation. People were talking about an inflation scare and it sent a shiver through the markets. Imagine if we returned to anything resembling normal monetary velocity.

All these new dollars are being dumped into the economy. A ton of them are immediately being parked in the stock market or other investments and aren't being used in a way that actually encourages healthy economic activity. This is doubly true for anyone in the middle or lower classes.

At this point, for those still with me, we should pull all this together. A seemingly benign concept — providing clarity for the role of a corporation — has evolved to be a disastrous economic reality.

With all this in play, it seems like the Fed can keep it up to the masses and even to those who should know better but are only looking at quick, profit-capturing trades. It seems like the government is unbound by creditors. But, just like the drive to push Friedman's concept to the extreme, this is a profoundly shortsighted approach.

This debt is real. This inequity is real. This divorce from reality and the inevitable reversion to mean is increasingly dangerous.

So what happens when we round the bend, so to speak? I wish it was like the old Creedence Clearwater Revival hit. I wish there was something truly good to look forward to.

I'm afraid that we're dragging too much of our baggage around that bend, though. As we gradually move past this pandemic, we have a lot to account for, and it has built up over so long I don't know if there is way out that isn't profoundly traumatic.