The Ghosts of Mallow Bay

Millions of dollars is buried at sea...

I spent the 4th of July surrounded by ghosts...

No, I'm not talking about the Founding fathers or the American revolutionaries who lost their lives in the fight for Independence.

I’m talking about the “Ghost Fleet of Mallow Bay”.

I woke up early Saturday morning to trek down to the Potomac River in Southern Maryland. My friends and I own a bucolic compound nearby, where we planned to spend the holiday like anyone else: wearing tri-corner hats, firing our muskets in the air, and blasting off fireworks.

Before we got to the festivities, however, I convinced the group to investigate another part of American history: the largest shipwreck fleet in the Western Hemisphere.

Mallow Bay is a small estuary that acts as a graveyard for over 200 U.S. ships that have been purposely sunk in the shallow waters. These doomed ships date all the way back to the 18th century. 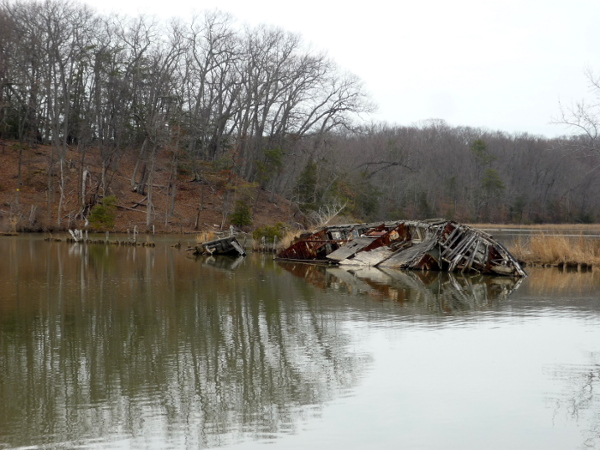 You may be asking, why in the world would anyone just dump hundreds of ships into a shallow bay in Maryland?

It’s a good question, and I have an answer…

The story starts in 1917, when Woodrow Wilson undertook the greatest — and most expensive — shipbuilding program in history. America had just entered World War I and faced a massive dearth of marine transport vessels. Wilson ordered 1,000 wooden steamships to be constructed in a mere 18 months. Congress approved it and the Emergency Fleet Corporation was born.

While the bulk of the ships were still being built, Germany surrendered and only 76 of the 731 that were commissioned had been deployed. That left hundreds of ships wasting away in the James River while the government decided what in the world they could be re-purposed for. Keep in mind that these ships cost about a million bucks a piece in today's dollars.

It turned out that leaky, hastily manufactured wooden ships were quite useless and Congress sold them off to the Western Marine & Salvage Company for pennies on the dollar (a measly total of $750,000 — government investment at its best!).

Western Marine bought hundreds of acres around Mallow Bay in order to salvage what they could from the ships, but rising anger from local environmental activists and fishermen led the company to light them on fire and sink them to the bottom of the bay. Another great investment...

So, it suffices to say we were staring at a long and storied history when we put our kayaks and canoes in the water and began to explore the wreckage. While it wasn’t the initial intention of the area, the entire scene is gorgeous — but with a wonderfully bizarre vibe. We paddled around the bay for hours and took in a number of old ships from all throughout history, each with its own peculiar name: The Accomac, the Benzonia, the Yawah.

Ospreys served as the ghost captains — their massive nests settling atop the dilapidated boats, circling and squawking at us when we got too close.

We jumped into the bath-warm bay water and swam around famed vessels like the Bayou Teche, which launched on July 4th, 1918 along with 94 others in the “Tidal Wave” — the greatest single-day ship launch in world history. The day was even celebrated with its own WWI propaganda poster: 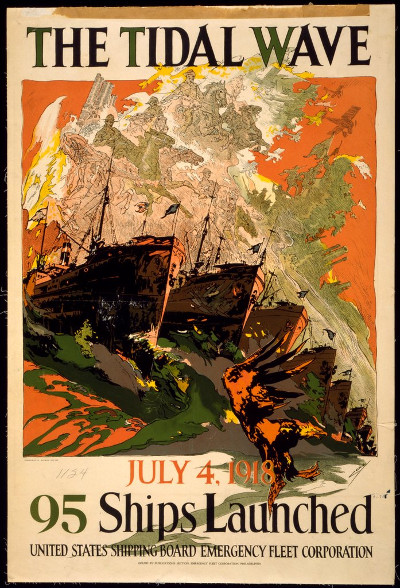 The Bayou Teche made it all the way from Cuba to France before resting in Mallow Bay.

So why am I prattling on about old naval history? Isn’t this supposed to be an investment newsletter?

Because no shipwreck story would be complete without buried treasure...

As we pulled the kayaks and canoes out of the water, a bearded old man in tattered shorts and a gray tank-top grabbed one side of my canoe and helped me pull it up the shore. Before I could thank him, he growled at me:

“Ya find any treasure?”

I laughed nervously. “There’s buried treasure on these ships?”

In his raspy, prospector-like voice he told me that there was “nothing but fool’s gold in these here parts.”

After that bit of wisdom, he laughed as well and stuck out his hand. In a perfectly clear dialect, he said “My name’s Dale, I’m an unofficial guide for the Potomac.”

Dale had already piqued my interest with his 49er/sunken treasure routine, so over a few warm beers I had in my backpack, we sat on a nearby log and got to talking about shipwrecks. He mentioned that there are over 3 million shipwrecks on the ocean floor and there are plenty of people out there trying to unearth them.

When I asked about famous local ships that went down, he told me the story of the SS Republic, which was launched from Baltimore in 1853. It made voyages from Panama to California during the Gold Rush.

But on October 19, 1865, while heading to New Orleans carrying an absolute fortune in gold and silver coins, the Republic ran into a hurricane and sunk to the bottom of the sea. It laid there for 140 years. When it was finally excavated, the treasure amounted to over 47,000 silver coins. 1,460 $10 gold eagles and 2,675 $20 gold double eagles were recovered.

The entire shipwreck treasure was worth over $75 million.

Dale also told me that there are actually millions of shipwrecks that are littering the ocean floor with treasures worth hundreds of millions of dollars'. The problem is that it could take a million just to excavate one of them.

But there is a far easier way to make a fortune on golden treasure, without pulling sunken ships out of the sea...