And the Commerce Department reported yesterday that the U.S. economy contracted by 1.4% on an annualized basis through the first three months of 2022.

That's a far cry from the 7% percent growth experienced in the final three months of 2021, and the weakest quarter since the spring of 2020 when the pandemic first hit.

Some analysts (especially those working for the Biden administration) chose to focus on the silver lining, by suggesting a 0.7% increase in consumer spending is evidence of underlying strength but I don't know why they'd expect that to continue.

That is, average hourly earnings were up 5.6% percent in March, according to the Labor Department, but when adjusted for inflation, average pay was down 2.7%.

So it seems like the increase in consumer spending is more a function of people paying more for goods and services than it is the result of consumer enthusiasm.

To that point, a Gallup survey published Wednesday showed Americans have dwindling confidence in the economy, with 42% rating current economic conditions as "poor" and 38% describing them as "fair." Just 18% of respondents described the economy as "good" and 2% as "excellent." (I bet they were billionaires.)

Furthermore, 76% said they think the economy is getting worse, compared to 20% who believe it's improving.

To me, that sounds like people are frustrated with soaring prices, declining stock values, and a housing market that most would-be buyers can't even participate in right now.

But again, with sky-high prices they've had no choice but to spend more.

And since wages are falling, they're having to dip into their savings account to compensate.

Remember, with everything shut down due to COVID, Americans' savings rates shot through the roof (not the interest rates on savings accounts, mind you, but rather the rate at which people save).

However, in January and February of this year, Americans managed to save a little more than 6% of their earnings after paying their bills. 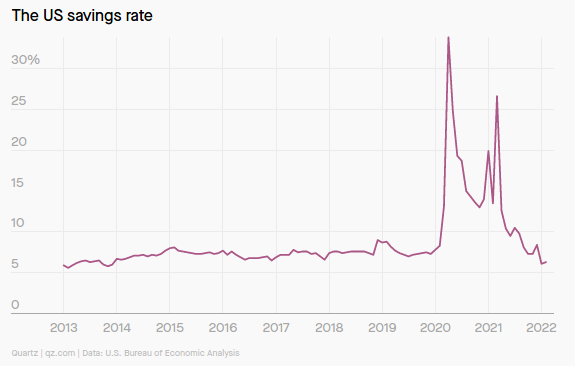 Again, to me, that looks like people have burned through the money they saved up during COVID.

Obviously that money won't last forever; certainly not with inflation burning it all away.

And what's more is that Congress has completely given up on any further COVID relief or stimulus, so there goes another buffer.

Given all that, this rosy belief that the unflappable U.S. consumer will continue to drive economic growth with their bottomless pockets seems pretty crazy.

That's what this iteration of the Fed does: It makes drastic shifts in policy based on fanciful predictions.

As a result, we're now in exactly the situation I feared and warned about back in January, when I wrote:

The Fed is going to be raising rates just as the economy starts to slow and amid serious downside risks. Those rate hikes are hypothetical now, but they're going to become very real this spring. And the adjustments to that new environment — one in which monetary policy is tightening — will accelerate. I don't anticipate that that will go smoothly.

At the time, I didn't think it'd actually happen.

I thought the Fed was duplicitious — not stupid.

I thought it was just billowing out some hawkish soundbites to try and reassure the public and our politicians that it'd start working to rein in inflation. I thought it'd stay on a pace of slow and small rate hikes, so as not to derail the economic recovery it sacrificed so much to spur on.

But I was wrong. The Fed is stupid.

It's now set to hammer rates higher and faster than most forecasters thought. And it won't even achieve its goal of squashing inflation — which at this moment has as much to do with supply chain issues and commodity costs as it does with monetary policy.

Sure, it may tamp inflation down a bit, but it's still going to persist. Except, unlike the past two years, it's not going to be accompanied by strong growth figures.

It's going to be made even less palatable by a recession, or in a best-case scenario, stagnation.

And unfortunately, there's not much investors can do in that kind of an environment.

Exposure to commodities is a good start. Then companies that deal in essentials, like grocers. Defense contractors, which will benefit from soaring defense spending outlays. And of course, banks, which get fees on everything and will continue to benefit from higher interest rates.

Those are the things I'm looking at anyway.

I'd encourage you to do the same.

P.S. My colleague Jason Williams recently tipped me off to an impressive opportunity in energy storage. I know it sounds boring, but batteries are a massive industry and only getting bigger. Renewable energy must be used or stored instantly. And there are no batteries big enough or strong enough to power the whole grid. Or at least there weren’t until now. Get all the details about the company cornering this market and minting a new generation of millionaires today.