Should You Buy the Dip in Hydrogen Fuel Cell Stocks?

Have you been seeing what’s going on in the market lately?

More specifically, what’s been going on in the fuel cell sector?

Since the start of 2021 stocks have been on a rollercoaster ride that is making some investors nauseous.

The S&P 500 and Nasdaq have been reaching all-time highs at what seems like a weekly basis followed by days of volatility.

Even crude oil prices had been recovering steadily all year until the Suez Canal fiasco set them back a little bit.

Overall though, it seems as if stocks have recovered and then some after the coronavirus-induced crash just over a year ago.

But even as market indexes and individual stocks reach new highs, there are a select few that can’t seem to get free from the clutches of volatility.

While more areas of the United States are opening up and more vaccines are being administered, the coronavirus seems to be a distant memory for some and it’s being reflected on Wall Street.

Unfortunately though, that’s not the case for all stocks and sectors.

The pandemic will have rippled effects that could last years. Sure, some areas will be impacted more than others — like semiconductor stocks — but the volatility can’t last this long in every sector.

Cannabis stocks fell early last week after Canada announced it may re-enter coronavirus lockdowns, which seems like a good dip to buy if you ask me.

But that’s not the particular dip I wanted to talk to you about today.

The sector I’ve had my eyes on lately is hydrogen fuel cells.

Fuel cell stocks started the year off strong, continuing an upward trend from the latter half of 2020 but that momentum came to a halt toward the end of January of 2021.

Since then, it has been a rocky go across the board.

Whenever I see stocks taking a beating, I can’t help but take an interest.

Like a shark sensing blood in the water, when I see that red next to a company name for a certain amount of time I have one thought in mind: “Is this a free meal?”

Now, I know there is technically no such thing as a “free lunch” but that doesn’t mean you shouldn’t take a deeper look at an opportunity if you think you’ve found one.

Baron Rothschild is famously quoted as saying, “Buy when there is blood in the streets, even if the blood is your own.”

Well, had you taken that advice on most stocks last year when the corona-crash happened, you would be sitting pretty right now.

But I don’t want to focus on coulda/woulda/shouldas. No, I’m focused on taking advantage of the possible opportunity happening right now. 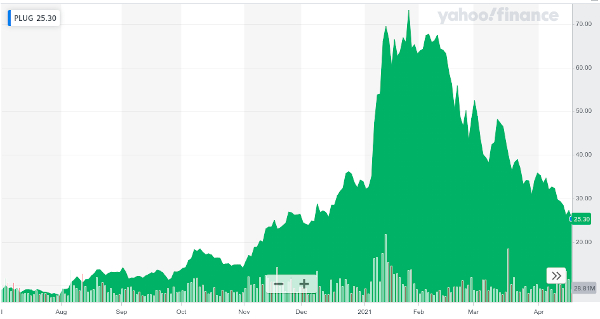 Currently, the stock trades around $25.

While no one wants to catch a falling knife, it’s hard to ignore the fact that nothing major has changed in the fuel cell industry. In fact, the outlook for the industry is mostly positive.

More and more fuel cell vehicles are being utilized for their zero-emissions properties, and it doesn’t hurt that President Biden has expressed the need for cleaner fuels, exhibiting a push to phase out oil and gas.

So join Outsider Club today for FREE. You'll learn how to take control of your finances, manage your own investments, and beat "the system" on your own terms. Become a member today, and get our latest free report: "Fuel Cells: The Future of Electric Vehicles"

As hydrogen fuel cells become more and more mainstream, certain companies are sure to see a rise in stock price.

If you’re not sure you want to commit to putting all of your eggs in one basket and would rather invest in a hydrogen ETF then you’re in luck.

As of March 2021, there are two exchange-traded funds that are centered around hydrogen fuel cell companies.

On March 9th, the Defiance Next Gen H2 ETF premiered under the ticker symbol HDRO on the New York Stock Exchange.

The timing of the listing was not ideal for those who bought the ETF right away, as it joined the sector when most fuel cell stocks were in the middle of their beatdown.

Overall, the Defiance Next Gen H2 ETF (NYSE: HDRO) is barely above water from its market debut, though it hasn't even been a month.

The other hydrogen ETF that made its debut in March was the Direxion Hydrogen ETF (NYSE: HJEN).

HJEN listed on March 25th and just slipped back into positive territory this week.

This isn’t a supreme performance by any means, but it could be much worse.

These ETFs are brand new so it will be interesting to see what they do moving forward, especially with all of the volatility taking place among fuel cell companies.

It’s hard to not see these ETFs moving higher as time progresses.

I have a feeling that if we check back into PLUG, HJEN, or HDRO in six months, they will be trading at higher or similar levels.

While these three examples are able to provide you exposure to the hydrogen fuel cell market, I’m not so sure they’re your best option.

There are a few different choices when it comes to gaining exposure to zero-emission fuels and hydrogen is certainly at the top of that list.

While most people believe that companies like Tesla are the future of the electric vehicle market, there are lots of factors at play that could ruin the innovative car maker.

The truth is, the lithium batteries that Musk and Tesla need for their vehicles are becoming obsolete more and more every day.

Batteries, especially lithium batteries, are also one of the markets that have been impacted more than others by the pandemic.

My colleague Jimmy Mengel has been shouting from the rooftops about a hydrogen fuel cell play that he believes could not only emerge as the top company in this market, but could also bring Elon Musk and Tesla to its knees.

He has fittingly been referring to this play as the “Tesla Killer.”

I’ll let him tell you all about it and how this company’s blue gas technology has the potential to make the returns the Tesla investors experienced look like peanuts.

Check out what Jimmy has to say right here.