Oil is the Only Positive for the Dollar

Oil has been a massive drain on consumers, beyond the obvious sticker shock at the pump...

We've been weakening our economy for decades by shipping dollars overseas while positioning ourselves in a hopeless entanglement of ancient feuds and international disputes.

Ever wonder what the other side of the coin is like?

It must be nice: international money flooding into the domestic economy, increased investment using the national currency, stability without need for diplomatic or perpetual military action.

If we can just hold on for a while longer, we're starting to see signs of the negative drag of oil on the U.S. economy finally turning around — and propping us up.

That's right. The first signs of a role reversal are already in play — and will accelerate over the next year.

Of course, the headwinds are too strong. QE is still creating an obscene amount of dollars. The global currency war is raging on, and the U.S. dollar is consistently testing 17-month lows.

But at least we've spotted something positive on the horizon.

Stories regarding America's reduced dependence on foreign oil have been circulating for close to a year, and I expect Outsider Club readers are well aware of what's going on.

As a quick recap, for the first time in 13 years, America is producing over half the oil it consumes. Much of this is due to the massive boom in rigs over shale oil deposits and rising operational efficiency.

Here's a look at growth from the EIA: 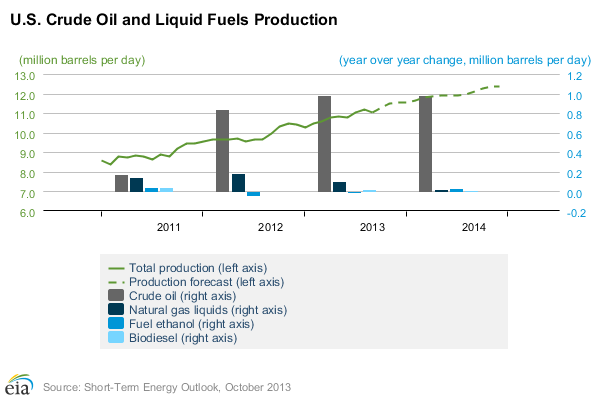 As you can see, this strong growth trend is projected to continue through next year — and beyond.

The increase in production and reduction of foreign dependence has already begun weakening OPEC's stranglehold on oil prices... and with it OPEC's outsized influence on America's domestic energy equation through production quotas.

In 2012, Americans bought 21% of OPEC's oil exports. OPEC earned a record $1.05 trillion in net oil export revenues that year, according to the U.S. Energy Department.

As domestic oil production grew through 2013, OPEC countries are expected to see a 5% revenue drop, to $955 billion.

It is still very early in this process, but rapidly weakening OPEC revenue is a welcome sign that the oil cartel's ability to pull as much money from American pockets as possible is becoming a thing of the past.

So join Outsider Club today for FREE. You'll learn how to take control of your finances, manage your own investments, and beat "the system" on your own terms. Become a member today, and get our latest free report: "Secret Dividends: How to Uncover One-Time Windfalls."

Oil and the Dollar

For decades, oil and the dollar have had a negative relationship. Oil prices and domestic demand have sapped the strength of the greenback as cash has flowed overseas and out of dollar-based assets.

Reducing outflows for oil strongly affects the current account deficit, which tracks outflows for trade, good, and services. The deficit reached a record high of $800.6 billion in 2006. It just reached a two-year low of $98.9 billion in the third quarter.

We aren't just seeing less of a negative effect from oil; we're about to see a positive correlation.

According to Bloomberg economist surveys, the dollar will be (on average) 2% stronger against 46 currencies by the end of 2014. This will be driven by an estimated 14% rise in the price of West Texas Intermediate crude.

Big firms put a lot of their money behind their own estimates this year, which are largely in line with the Bloomberg estimate. BlackRock, Goldman Sachs, Citigroup, and UBS are all betting dollar gains from domestic energy production will outweigh the effects of the Federal Reserve's quantitative easing efforts.

BlackRock said of its investment: “We are bullish on the U.S. dollar due to the country’s energy boom, and long-term growth prospects. The prospect of U.S. energy self-sufficiency could underpin a bullish dollar stance, and a cautious view toward countries dependent on dollar funding.”

For most of the year, these companies were right on the money. Unfortunately for them, the gross incompetence of politicians externally disrupted the market's confidence in the dollar, as misguided as that confidence may be in the long term.

The positive force was there the whole time, though. Without it, perhaps the U.S. dollar would have easily broken through the 17-month low it keeps testing and seen significant devaluation, which would have eaten away at our already stagnant wages and savings at a time when few can afford it.

The Carrot and Stick

This information is one of the few bright spots in the news you'll find about the American economy and our nation's currency.

It also shows how important the domestic energy boom will be... and how U.S. politicians will increasingly align themselves with oil and natural gas extracting operations.

While politicians can certainly rip it apart through misguided regulation and negligence, there is very little they can truly do to help the strength of the economy... As we've seen time and time again, interference in the free market only destabilizes the system and creates new bubbles.

In that sense, reducing the current account deficit, reducing dependence on volatile and repressive OPEC countries, and bolstering the strength of the dollar in one fell swoop is a no-brainer.

All politicians have to do is stay out of the way.

I know, it seems like too much to ask.

And it's obvious the Obama administration hasn't figured this out, although projects such as Keystone XL never go away... They are simply shelved until the need is too great, or another administration comes along.

Over the next several years, I believe we can expect increasing support from Washington for energy production, as long as environmental impacts can be reasonably contained.

Production will increase with pipeline capacity, and the positive effects of domestic oil and natural gas continue to switch from a drag to a boon for the U.S. economy.

We're only in the formative chapters of the new American oil boom...

I'm looking forward to this story developing as one of the few positive forces affecting the U.S. economy and the U.S. dollar for years to come.