Because there’s no COVID in space...

The cattails rustled, and I could hear squishing feet as a strange man emerged from a Southern Maryland marsh, muddy, disheveled, shivering.

He’d been hiding there submerged for some time.

Climbing up onto the docks where I kept my boat, he approached and breathlessly asked if I could hide him.

The place had been swarming with cops not an hour before I encountered the stranger. They searched high and low but couldn’t find him.

They told me and the others on the property that they’d been in a high-speed chase with a suspected kidnapper, and that he was armed and dangerous. It turns out he took off with his own child and stole his wife's black car, which was barely visible to us on top of a distant hill. He was last seen running into the creek flanking the property.

The police thought he was still hiding out in the area, maybe in the trees or in the water. So they made a show of leaving the property, loudly shouting that they’d lost him and were continuing the search elsewhere.

Little did he know, the cops were setting a trap.

“Give us a call if you see this guy,” the officer said. “We’re sitting right up the road and we’ll hustle back in time to save the day.”

“Great,” I thought. “So we have an armed and dangerous felon hiding on the property and we have to just sit here and wait for him?”

What a ridiculous position we were in...

I grabbed a baseball bat and a beer and sat on a lounge chair guarding my boat.

Not long after the coppers left, the stranger felt it was safe to come out and parlay with us.

When we told him the cops were already on the way and that running was his only option, he rolled his eyes, let out a big sigh, pulled up his falling pants, and booked it.

Trouble for him was we were located on a peninsula, and there was nowhere to run except for a grassy knoll on the edge of a cliff overlooking an inlet of the Chesapeake Bay. A steep drop...

Not a minute later, an armored vehicle with six heavily armed officers hanging off the side plowed down the driveway, a helicopter’s blades thudding overhead.

The man fell to his knees and looked up to the sky when suddenly a camouflaged officer channeling Ray Lewis tackled the living daylights out of him.

The chief approached us afterward, thanked us for our cooperation, and said, “Remember, you can never outrun your past, but hopefully you can learn from your mistakes.”

This line has stuck with me to this day...

As we're living through history — COVID, inflation, geopolitical tensions — maybe one day we'll look back fondly on these trying times.

For now, humans should collectively look to the sky and celebrate in unison because we have the chance to peer into our past and learn from it, thanks to NASA's newest technology.

While the world was busy opening Christmas presents last month, NASA successfully launched the most powerful and most expensive telescope in history. The 6.5 metric ton James Webb Space Telescope (JWST) was more than two decades in the making and cost roughly $10 billion.

JWST successfully crested the atmosphere on December 25 and is now orbiting its way to the Earth’s second Lagrange point (it's not where ZZ Top lives), located at the opposite end of the Earth from the sun. This diagram from NASA helps to give some context... 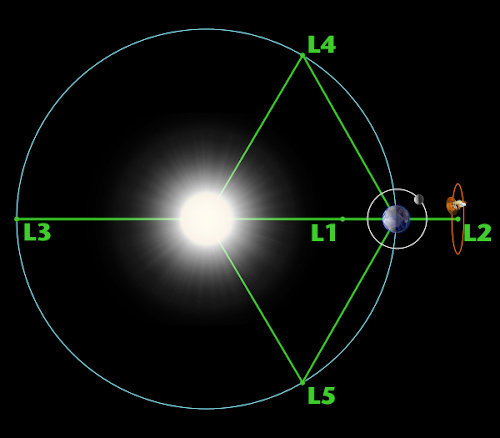 It’ll take 30 days for the telescope to travel one million miles and reach its final destination, at which point it’ll maintain a constant orbit using the combined gravitational pulls of the sun and Earth.

And just last week, JWST completed its most challenging obstacle: unfolding itself in space. In order for the telescope to launch, it needed to be folded into the Ariane 5 rocket payload fairing, the protective cone at the nose of a rocket. Once in orbit, the telescope unfurled itself, much like a budding rose.

So join Outsider Club today for FREE. You'll learn how to take control of your finances, manage your own investments, and beat "the system" on your own terms. Become a member today, and get our latest free report: "Your Space Stock Starter Pack."

NASA Mission Systems Engineer Mike Menzel says that predicting how objects behave in space is much like pushing a string with your finger and trying to guess what shape it’ll take; it’s nearly impossible.

Two decades and $10 billion later, and we’ve got this masterpiece barreling through space... 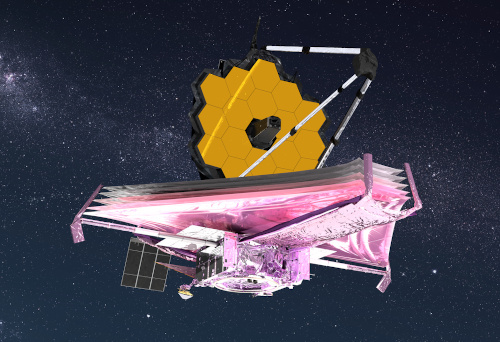 JWST is equipped with five massive heat shields the size of a tennis court and a mirror that’s three times as wide as the 31-year-old Hubble Telescope’s.

In fact, its infrared system is 100 times more powerful than the Hubble’s. That means it’ll produce images with higher resolution and better magnification. With the ability to peer through space dust using near- and mid-infrared spectrums, scientists will be able to see into the darkest corners of the universe.

By looking so deep into space, JWST effectively acts as a time machine, as it’ll take pictures of what the universe looked like a few hundred million years after the Big Bang. We all know that when we look to the sky, the light we see is millions or billions of years old, so the further we look into space, the further back in time we can see.

Scientists also hope to determine the gases present on far-away planets, giving us a chance at finding habitable planets with possible extraterrestrial life.

Unlike the Hubble, however, JWST can’t be repaired if something goes wrong... at least not yet.

NASA hopes that within the next 10 years — JWST’s mission goal — we’ll be able to deploy robots to fix telescopes and even build and launch telescopes from space.

The success of the telescope is thanks to the cooperation of 15 countries, and lucky for us, the first images from JWST will be sent to John Hopkins' Space Telescope Science Institute here in Baltimore, Maryland.

Needless to say, we’re waiting for those images with bated breath...

We’ve clearly only just scratched the surface of what’s possible in space.

And as NASA peers into the past, companies back on Earth are seeing dollar signs.

Northrop Grumman (NYSE: NOC) partnered with NASA on the JWST project, and its stock has consistently outperformed the market, up more than 10% for the month. Aerospace and defense contractor Lockheed Martin (NYSE: LMT) is up nearly 7% for the month. Even Tesla (NASDAQ: TSLA), Amazon (NASDAQ: AMZN), and Virgin Galactic (NYSE: SPCE) have spent a fortune on satellites and commercial rocket launches, proving that space isn’t reserved just for government-funded entities anymore.

If you want to follow the best companies and invest in this trend right now, then our defense and aerospace service is right for you.

If you sign up today, you'll get exclusive access to an under-the-radar space stock that will only grow stronger in 2022 and beyond.

The world is watching...