After spending a year engulfed in riots following the death of George Floyd, our country is once again awash in protests over another police killing.

In this case, police officer Kim Potter has been arrested and charged with manslaughter after fatally shooting a Black motorist.

What are the events that led to this?

Well, the victim, Duante Wright, was pulled over for having an expired registration (an infraction I've been guilty of but never killed for in the past). He also had an air freshener hanging from his rearview mirror, which I didn't even know was a crime in some areas.

That, along with a pile of unpaid tickets for other minor infractions, was enough cause for arrest.

But Wright panicked, and for some reason attempted to scramble back into his car and drive away.

As he did so he was shot by Potter, who somehow mistook her service weapon for a taser.

To be honest, this whole situation is crazy.

There's clearly enough blame to go around but that's almost besides the point, which is that this altercation never should have resulted in a person's death.

In fact, in my opinion, it never should have happened at all.

No, what we need to do is take the human error out of these situations.

We need to eliminate the threat for both police and civilians and use technology to fill the gap.

In many cases, we're already doing this.

For example, with speeding cameras and redlight cameras, you can get a ticket without ever being pulled over.

It's happened to me repeatedly, and while I didn't love the tickets, getting my citation in the mail was better than getting pulled over by a cop.

I also in the past have been ticketed for having an expired registration just like Duante Wright, except in my case the citation was left on my windshield.

So if you can ticket me for a minor offense without my car being in motion or me being anywhere near it, why are we chasing people down on the street for the same infraction?

This isn't just an inconvenience for motorists, either. It's about keeping officers out of harm's way.

In 2015 a study by the National Law Enforcement Officers Memorial Fund found that traffic-related instances were the leading cause of death among officers in 15 of the previous 20 years.

In 2019, 43 officers were killed in traffic-related incidents.

And in 2020, traffic-related fatalities accounted for 44 officer deaths. Of those, 18 were car crashes involving a collision with another vehicle, eight were single vehicle crashes, 15 were struck while on the side of the road, and three were involved in a motorcycle crash.

On top of that, thousands of assaults stemming from routine traffic stops occur each year.

This is largely because the most common reason for contact with the police is being pulled over while driving.

So if you reduce traffic stops, you can reduce the number of deaths on both sides of the equation.

And I've found a few technologies that could really help in that regard...

For example, I came across this little guy at a robotics conference I attended a few years ago... 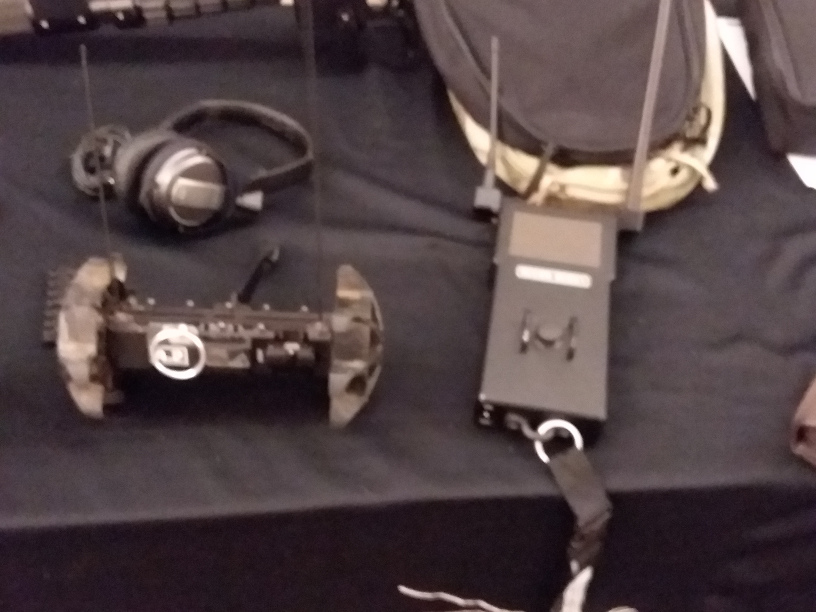 It's called the Throwbot, and it's basically a camera on wheels that can be thrown and then controlled with a portable handset. It's great for surveillance in tight quarters.

So join Outsider Club today for FREE. You'll learn how to take control of your finances, manage your own investments, and beat "the system" on your own terms. Become a member today, and get our latest free report: "5 Defense Contractors Crushing the Market."

No doubt, “Shots fired!” is an all-too-common call from witnesses or officers on patrol. But pinpointing the exact location of gunfire can be difficult and takes up valuable time.

ShotSpotter solves that problem with technology that uses sensors to track gunfire to a precise location in less than 60 seconds. Analysts then track the data and instantly relay it to police.

The technology is expensive but there's no doubt it saves lives.

“When ShotSpotter alerted us, we got to the scene," Syracuse Police Deputy Chief Joe Cecile recalled of one incident. "We had enough trust and shot matter to know that something must’ve occurred there, even though we didn’t have any shell casings. We started looking up and down the street, and we eventually located a victim inside a foyer of a building who was bleeding to death.”

Another dramatic use of ShotSpotter technology took place in 2017 in Fresno, California, where police used it to apprehend a criminal on a killing spree. The technology enabled police to trace the killer’s movements and apprehend him in four minutes and 13 seconds.

Meanwhile Motorola Solutions (NYSE: MSI), which has been making police walkie-talkies and radios for decades, is now investing in body cams (with built-in radios).

Obviously, body cameras are only growing more prevalent with the increased focus on police violence. We have an accurate idea of exactly how the situation between Wright and Potter played out because of it. Without that footage, the details probably would not have surfaced.

Drones, made by AeroVironment (NASDAQ: AVAV) and others, can enforce traffic laws and provide a bird's-eye view and increased awareness of dangerous situations for officers on the ground.

And recently, I recommended a facial recognition technology that can identify known terrorists, wanted criminals, and even weapons, and alert authorities without the perpetrators ever even knowing. Deployed across a network of cameras, the AI can also track crimes in real time, giving police a huge logistical advantage.

In any case, we need to rethink the role of police in our society. We need fewer interactions between police and the public — especially when it comes to minor violations. And when such confrontations are inevitable we need to lean on technology to ensure they're handled as safely as possible.

All of these companies and products can help do that.