Get Your Money Out of the U.S.

Warren Buffett once quipped, “Only when the tide goes out do you discover who's been swimming naked.”

Since the tide receded on the emerging market rally after the 2009 crash, it has exposed some markets to be naked as jaybirds.

But while emerging markets may be a tad threadbare these days, I don't believe they've all been skinny-dipping...

Emerging markets appear to have bottomed out.

Even the BRICS nations — Brazil, Russia, India, China and South Africa — which are supposed to be the beacon of hope for emerging economies, have struggled mightily over the past couple years. (You may have heard the "submerging markets" joke rolled out once or twice.)

Unlike the emerging market crash of the 1990s, however, some key fundamentals are in place to keep many of these economies from heading out to sea...

“This isn't your father's emerging market crisis,” says Robert Parker, senior advisor at Credit Suisse. “The circumstances are very different. The key question is, ‘Are we going to have, as we had in the 1990s, a range of sovereign debt defaults?’ And the answer to that is 'No'.”

That's because, unlike the last crash, emerging markets today do not have the massive government debt and fixed exchange rates that rocked them in decades past.

If you're looking to buy some growth stocks at a big discount, it may be high time to get your money out of the U.S. and into some beaten-up emerging markets.

So join Outsider Club today for FREE. You'll learn how to take control of your finances, manage your own investments, and beat "the system" on your own terms. Become a member today, and get our latest free report: "The VIX Indicator: Use the Ultimate Fear Gauge."

Right now, they have a slew of other factors in their favor, especially in comparison to the United States:

Brian Dennehy of Dennehy, Weller & Co. told the Telegraph, "This could be the best opportunity in three decades." He noted price-to-earnings or P/E ratios for emerging markets as a whole are about 40% cheaper than the S&P 500.

Investors with a long-term view may be able to buy into these economies as discounted prices.

So let's pull a BRIC off the wall to see if it can weather the storm, or simply drift out to sea...

Everyone had high hopes for Brazil.

As recently as 2009, the Economist depicted the famous Christ the Redeemer statue literally rocketing into the atmosphere... 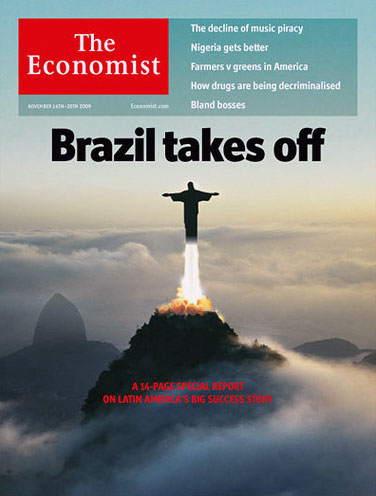 But inflation and labor unrest have dragged the Brazilian economy down. It grew a minuscule 0.9% last year, and the stock market has been trimmed closer than a Brazilian wax.

Forecasts are pointing to 2.4% growth in Brazil's economy next year — not what we'd consider a breakout, but certainly a step in the right direction.

Inflation levels have also dropped for the third month in a row.

In addition, Brazil is uniquely positioned in the agriculture market. Brazil is the largest exporter of many of the world's major crops — coffee, soybeans, and sugar cane — and the single largest producer of beef.

"Where in the world does agriculture contribute between 25%-30% to the GDP, and where is it possible to harvest three crops per year and then, during the rest of the year, use the land for beef pasture?" posited Johan van der Ven, former managing director of Nutreco Brazil.

The South American country also produces one-third of the world's coffee supplies. And due to a record crop this year, Arabica coffee prices have hit four-year lows, which has led to $70 million being pumped into coffee ETFs.

While there still may be some down trending for the rest of the year, coffee will remain a major moneymaker in Brazil over the long term.

There's no doubt Brazil is beaten down right now...

If you're looking for an easy way to play a Brazilian rebound, iShares MSCI Brazil Capped (NYSE: EWZ) is beginning to creep back up after hitting a four-year low in July.

Emerging markets are certainly more volatile than U.S. stocks have been, but with greater risks come greater rewards.

EWZ returned 16.7% over the past ten years, while the Vanguard 500 Index averaged 7% annually.

Over the next few weeks, we'll be digging into the rest of the BRICS, one by one.

We'll also be searching for opportunities in countries that rarely, if ever, make it into the emerging market conversation...

If you can stomach a bit of turbulence, you should be rewarded when these markets get cranking again.

A new JP Morgan report claims, "... as bad as the news flow is in emerging markets, we would highlight that it is not the grounds for a crisis. However, valuations are at crisis levels."