1 in 3 Americans Satisfied Living in U.S.

Get your slice of the pie.

I hope you had a relaxing Independence Day with lots of fireworks. We didn’t have any in Baltimore City, and I think I know why. More on that in a bit...

First, we need to celebrate our freedom from an oppressive oligarchy that restricts our travel and tells us what to wear... freedom from taxation without representation, where our tax dollars go into the pockets of the rich... freedom from oppressive laws that benefit those in power... and freedom from a government that spies on its own citizens without a warrant. Oh, wait... maybe we’re not there just yet.

Seriously though, this is a time to feel good about the country and take advantage of all it has to offer. And Americans have much to celebrate.

Although the U.S. hasn't reached its goal of vaccinating 70% of the population, we’re nearing 50% and the mask mandates have mostly been lifted.

Also consider that the U.S. markets performed exceptionally well last year, despite a pandemic. The Dow returned 6.9%, the S&P 500 returned 18%, and the Nasdaq returned 43%.

Just look at the performance of the American FAANG+ stocks, that is, Facebook, Apple, Amazon, Netflix, Google parent company Alphabet, and Microsoft... 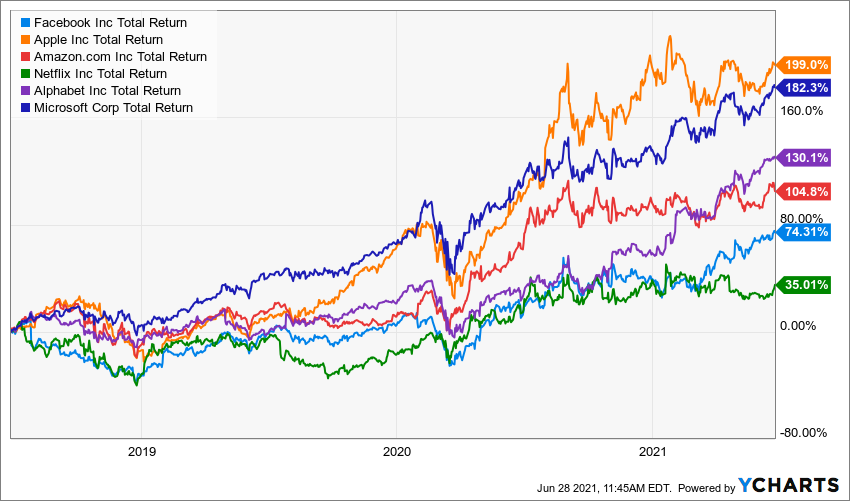 And a recent Gallup Poll confirms 36% of Americans are satisfied with the current direction of the country and that they're feeling less worry and more happiness...

America holds true as the land of opportunity, hope, and sacrifice.

So when it comes time to celebrate, what better way than to blow some stuff up, right?

Here in Baltimore, Maryland, we had no fireworks.

The city canceled its traditional Inner Harbor fireworks show over COVID-19 concerns... even though the mask mandate was lifted July 1.

The only logical explanation is a fear over the new Delta variant of the virus, but I suspect the city just wanted to save money. Knowing Baltimore, it’s probably the latter.

So folks had to travel outside the city to watch other town's shows or risk buying their own explosives.

Because I grew up just south of the Mason-Dixon line, I’ve seen some creative home fireworks displays and scary mishaps. But I’ve also witnessed the illogical laws of state government regulation there. These laws do not protect anyone.

Sure, you don’t want kids riding around tossing M-80s at each other through car windows or Uncle Johnny drinking one too many beers, sticking a rocket in the ground crooked, and catching the neighbor’s roof on fire. But why restrict something so colorful, loud, and dangerous? It’s kind of who we are as a people.

Since I can remember, all “consumer,” or Class C, fireworks (anything that might be dangerous) were illegal for Pennsylvanians to purchase in their own state but legal to possess and use. I believe that law was just recently changed so that Pennsylvania residents can now purchase fireworks in state.

Marylanders still can’t purchase, possess, or use consumer fireworks in their state without a permit, but they can travel over the Pennsylvania line and purchase them there.

Make sense to you? Me neither.

Buy This, Not That

We see it all the time in this country.

You can purchase a handgun or rifle in Pennsylvania and walk out with it the same day. But you need to take a weeklong training course and pay a hefty fee to buy a handgun in Maryland.

It’s illegal to purchase marijuana recreationally in Washington, D.C., but you can buy a $60 T-shirt at a dispensary and it’ll come with a “free” bag of weed that you can smoke on the street.

Clearly if someone wants something bad enough, they’re going to get it. It doesn’t matter what laws are in place; there’s a way to get anything.

So maybe the ATF should be a convenience store, not a government agency.

It’s this backward logic permeating throughout our government that shows how little freedom we actually have and how far we have to go to obtain true liberty. Rep. Jim Jordan said it best at last week's House Judiciary Committee meeting when addressing Fox News host Tucker Carlson's claims that the NSA had spied on him:

An informed public is critical to a well-functioning democracy. When the Department of Justice prosecutes journalists or implements a gag order so that people cannot speak out about the government’s actions, democratic values are undermined... It should be incredibly rare in the United States that people are not allowed to speak freely about the government’s actions.

But distrust of the government is par for the course in America. It’s always been that way. That’s what led to our founding as a country in the first place. The ability to question the government is what makes this country exceptional.

America didn’t get to where it is today by chance. The revolutionary idea of putting the government in the hands of the people is what propelled it forward as a world leader.

We’re all individuals in this country brought together by a common goal of succeeding and helping others succeed as best we can.

Even with all its past and continued struggles, America remains an exceptional nation, and its hopeful beacon of light shines brighter than ever.

Let’s celebrate how far we’ve come, knowing that together we have the strength to build a better tomorrow.

P.S. If you traveled at all last weekend, you were likely scanned by this stealthy new technology. It’s taking over airports, train stations, and large public venues. It’s already saved countless lives in the fight against COVID-19, and there’s one $0.50 stock holding all the patents and now is the perfect time to get in... before worldwide travel really opens back up.